Around the world, most societies don’t care for immigration, particularly when there’s too much of it. Global polls from Ipsos and Pew Research have illustrated the normal dislike of foreigner diversity. Human nature is deeply tribal, dictating that we all like our own group the best and are somewhat suspicious of those who don’t share out language, culture and values.

Mass immigration is a favored project of elites, who like the reduced cost of labor and see exploitable third-worlders as potential household help.

Immigration is even less popular when historic enemies (e.g. Muslims) have been permitted to enter by the millions. London is no longer majority white and some areas have been declared sharia zones where infidels better behave according to Allah in their own country. Plus there has been serious terrorism, like the 2005 London bombings, and appalling crime, particularly the sexual targeting of young English girls by Muslim gangs.

There have been recent murmurs from the British government that it would toughen up against illegal aliens, though actual seriousness remains to be seen. Not a minute too soon either, since the EU requires the free entry of Romanians and Bulgarians later this year.

The graphic below from the recent Sky News poll is of rather poor design, since it’s hard to read the important details. The 67% part says: “Take drastic action” The UK population is already too large and the government should take drastic action now to reduce migration. 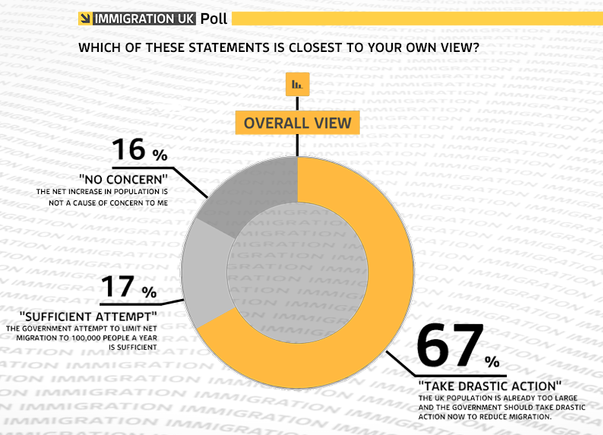 The Home Secretary has insisted the Government is tackling immigration after a Sky News poll revealed a demand for “drastic action”.

Theresa May told Sky News steps were already being taken to tighten rules on migrants’ access to benefits as she noted the findings of the survey.

It found more than two thirds of the British public believe the UK population is too large and want the Government to go further.

Some 67% of people questioned said the coalition’s attempt to reduce net migration to 100,000 a year was not sufficient and that more should be done.

More than a quarter of those polled (27%) believe the wave of immigration Britain has experienced in the last decade has brought no positive benefit to the nation.

And more than half (52%) say they will be more likely to vote for a party that promises to “significantly” reduce the level of migration.

The poll, conducted by Sky News as part of a week-long examination of the issue of immigration, found the people most concerned about the impact of immigration are the ones least likely to have been exposed to migrants.

For example, 71% of people who live in the countryside think drastic action is needed, compared with 53% in urban areas.

Mrs May insisted: “The Government understands the concerns that people have about immigration and concerns that over the years perhaps people feel politicians haven’t addressed this in the way that they should.

“Immigration overall has been good for the country. What is a problem is when immigration is not controlled when we see it putting pressure on jobs, wages and public services.

“Some people have raised concerns about people getting access to benefits. We are tightening up the rules on people claiming benefits and a number of other areas as well.”

She denied Government “scaremongering” was to blame for the finding that those with the strongest feelings about migrants lived in areas the least affected.

David Cameron’s spokesman agreed the issue was a “real priority” for people and said the Government was taking “very real and important measures in this area”.

Chancellor George Osborne, speaking from Beijing, also stressed the determination to cut immigration and pointed out it had already fallen by a third since 2010.

He told Sky News: “We inherited a situation from the Labour government where they had signed away all these treaties which allowed these new countries to join the European Union to come to Britain.

“There were no controls on the borders. We have got a grip on that situation. David Cameron, Theresa May and the whole government have imposed limits on immigration.”

Championing foreign investment, he added: “One of the things Britain has to do is not rely on immigration for its economic success. We need to go and make our own way in the world.”

Boris Johnson, also in Beijing, told Sky’s Mark Stone that “in an ideal world” Mr Cameron would make control over access from EU countries part of his renegotiation with Brussels.

He called for longer periods before people coming to Britain could claim UK benefits, but admitted the way forward was now “very, very hard”.

“You have got to crack down on illegal immigrants and stop them coming with a much tougher border regime. But at the same time you don’t want to throw the baby out with the bathwater,” he said.

“We have had something like a 60% reduction in immigration from New Zealand and I’m not sure that is entirely what we wanted to achieve.”

Approximately two thirds of the increased population is likely to come from increased immigration.

Between 2001 and 2011 the population of England and Wales grew by 3.7 million – the biggest increase in 200 years – with 2.1 million immigrants accounting for the majority of the increase.

The poll of 1,508 adults – conducted for Sky News by Survation – found widespread concern among the public about the impact immigration has had on public services.

The majority of those questioned believe the NHS, education system, and housing and welfare systems have been negatively affected by immigration.

And almost three quarters (74%) are concerned about the prospect of Romanians and Bulgarians being allowed free entry to Britain later this year.

Almost two thirds of those who took part in the poll (64%) believe employers should be given tax breaks for employing young, unemployed Britons.

And over half (52%) say companies should be forced to offer jobs to UK-born workers first.

Some 42% of those questioned believe the current debate about immigration in the UK is being unfairly shut down by accusations of racism.

A similar number, 40%, feel they will be labelled a bigot if they raise the issue in public.

In some good news for the coalition, almost two thirds of people (63%) support a new rule for British people to have a minimum income of £18,600 if they want to bring a non-EU spouse into the country.

A similar number, 65%, agree with a Home Office proposal that travellers from certain countries judged to be “high-risk” should pay a £1,000 bond to be allowed to visit Britain.