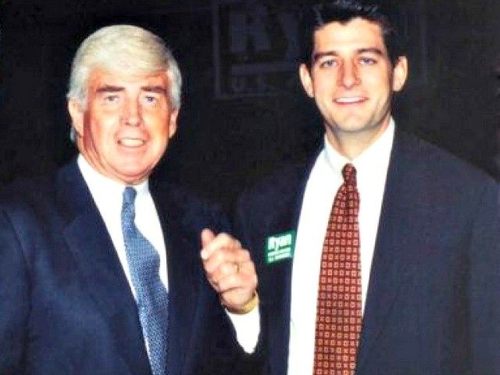 At VDARE.com, we've never thought much of Paul Ryan (and even less of his mentor Jack Kemp) so we're naturally delighted by two powerful Ryan-ripping stories by Brietbart's Julia Hahn: Both stories contain much detail about Ryan's dogmatic immigration enthusiasm, devastatingly described by NumbersUSA's Roy Beck:

There’s nobody in the Republican Party who could be worse than Paul Ryan. He has spent his entire adulthood ideologically connected to the open borders crowd. Open Borders is in his ideological DNA. That’s the terrifying thing. He’s an ideologue and his spent his whole life working for ideologues

Hahn also provides details, some new to me, of Ryan's conspiring as a GOP staffer with the Treason Lobby to sabotage the Smith-Simpson legislation in the mid 1990s—"the closest America ever got post-Kennedy to actually cutting immigration. But corporate-wing Republicans including [Ryan's boss, then-Senator] Brownback rallied against and defeated the bipartisan immigration reduction campaign." [VDARE.com link].

While Paul Ryan has argued that more low-wage immigrant labor is needed to fill labor shortages, National Review’s Rich Lowry once declared, “The next time I hear a Republican strategist or a Republican politician say that there are jobs that Americans won’t do, that person should be shot, he should be hanged, he should be wrapped in a carpet and thrown in the Potomac River.”

Ironically, despite the fact that Paul Ryan is diametrically opposed to the National Review on the critical issue of immigration, the publication has since endorsed his run for Speaker of the House. In an editorial yesterday, the publication made a veiled allusion to Ryan’s support for open-borders, writing that “He [Ryan] would have to commit to keeping immigration legislation that most Republicans oppose off the floor, whatever his own opinion of it.”

In effect, National Review is arguing that their own preferred pick for House Speaker should remain silent on one of the most important issues facing the country. [Links in original]

This, of course, merely continues the post-purge National Review's failing efforts to mediate between its patriot readers and the editors' real concerns: the approval of Conservatism Inc, the donor class, and the Main Stream Media.

In fact, as part of the long ago, 1990s push in Congress to shut off the immigration valve, National Review published a cover story, Electing a New People, which grimly warned that the arrivals of millions of new immigrant voters would disenfranchise the ballots of GOP voters. Ironically, that prediction came to pass: analysis shows Paul Ryan would be Vice President today if not for the enormous immigrant voting-bloc he helped create – a voting bloc that enthusiastically rejected his platform of entitlement and tax cuts. [Link in orginal, VDARE.com emphasis].

Her link is to a pdf. version of the story that Ed Rubenstein and I wrote—which I now believe triggered William F. Buckley's firing of then-Editor John O'Sullivan and the abandonment of NR's brief championing of immigration patriotism, at the behest (and to be benefit of) the magazine's current editors, in alliance with Congressional GOP operatives like Ryan.