Having been an observer of National Review for years now it is becoming more evident that their business and readership model is failing.  For many weeks now this haughty publication has been soliciting its readers for funds to keep it going.  Considering the largely negative responses to the solicitation articles, NRO’s irritating appeal is not resonating with their readers. 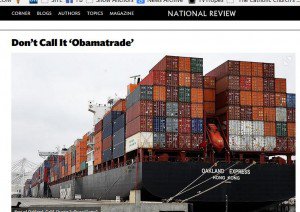 And this is hardly surprising as NRO has been the epitome of muted, constrained, and ultimately compromised conservatism for a long time.  The readers are still fuming over the purging of Derbyshire, Steyn, and even the cancellation of Ann Coulter’s column in 2001.  Recently, an affront to NR’s traditionalist Catholic roots was the meandering, incoherent article justifying gay marriage written by NRO’s managing editor Jason Lee Steorts. And to top it all NRO pulled a full court press, including an editorial, advocating the secretive and treasonous (especially to immigration) TPP and TPA legislation.[ Don’t Call It ‘Obamatrade’, by The Editors June 11, 2015]

It is also a sad commentary on NRO when the person they attacked most for entering the 2016 presidential race is not any of the Democrat Party candidates but Donald Trump who appears to be a strong immigration patriot.  The crude hit piece by one of NRO’s newer writers, Kevin Williamson, barely mentions Trump’s positions, but is instead a character assassination that stoops to name calling: Witless Ape Rides Escalator, June 16, 2015.

Peeling back the curtain it is obvious that NR is beholden to the sold-out Republican hierarchy, and continuing the tradition started by William F. Buckley is still obsessed with its acceptance by the Eastern liberal establishment.  However, given the current era where there are many dynamic conservative choices available online NRO comes across as insipid, and hopelessly compromised in comparison.  NR will not disappear tomorrow, but its continued decline, unless it radically reinvents itself, is inevitable.

James Fulford writes: The thing that strikes me about this is that these fundraising appeals allow comments. Our readers may want to try explaining to NR what it's doing wrong.