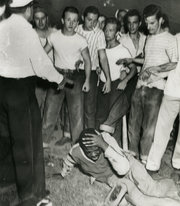 An officer stepped in after young white men attacked a young black man at Fairground Park in St. Louis in 1949. The death of Michael Brown, 18, has revived racial tensions in the area.

I’m always struck by how seldom prestige journalism about race takes notice of developments since, roughly, Bull Connor. For example, above is a photo that the New York Times thinks is informative in understanding what’s going on in Ferguson, MO.

In contrast, developments from the liberal-run last 50 years, such as Section 8 rental vouchers, go unmentioned even though what has been changing in Ferguson is do to 21st Century liberal policies like Section 8 moving poor blacks from St. Louis to the “apartment farms” put up in one corner of Ferguson.

For example, if I Google “‘Section 8? Ferguson” I get:

I.e., nobody else is terribly interested in the Section 8 story about Ferguson.

In the New York Times, we see a good example of how blind elite media are to policies on the last half century and how much they prefer to focus upon sins of white racism in the increasingly distant past:

… The origins of the area’s complex social and racial history date to the 19th century when the city of St. Louis and St. Louis County went their separate ways, leading to the formation of dozens of smaller communities outside St. Louis. Missouri itself has always been a state with roots in both the Midwest and the South, and racial issues intensified in the 20th century as St. Louis became a stopping point for the northern migration of Southern blacks seeking factory jobs in Detroit and Chicago.

As African-Americans moved into the city and whites moved out, real estate agents and city leaders, in a pattern familiar elsewhere in the country, conspired to keep blacks out of the suburbs through the use of zoning ordinances and restrictive covenants. But by the 1970s, some of those barriers had started to fall, and whites moved even farther away from the city. These days, Ferguson is like many of the suburbs around St. Louis, inner-ring towns that accommodated white flight decades ago but that are now largely black. And yet they retain a white power structure.

Although about two-thirds of Ferguson residents are black, its mayor and five of its six City Council members are white. Only three of the town’s 53 police officers are black.

Turnout for local elections in Ferguson has been poor. The mayor, James W. Knowles III, noted his disappointment with the turnout — about 12 percent — in the most recent mayoral election during a City Council meeting in April. Patricia Bynes, a black woman who is the Democratic committeewoman for the Ferguson area, said the lack of black involvement in local government was partly the result of the black population’s being more transient in small municipalities and less attached to them. …

This year, community members voiced anger after the all-white, seven-member school board for the Ferguson-Florissant district pushed aside its black superintendent for unrevealed reasons.

If a politician resigns for undisclosed reasons, it’s probably because he didn’t want them revealed.

That spurred several blacks to run for three board positions up for election, but only one won a seat. …

Although experience and statistics suggest that Ferguson’s police force disproportionately targets blacks, it is not as imbalanced as in some neighboring departments in St. Louis County. While blacks are 37 percent more likely to be pulled over compared with their proportion of the population in Ferguson, that is less than the statewide average of 59 percent, according to Richard Rosenfeld, a professor of criminology at the University of Missouri-St. Louis.

In fact, Mr. Rosenfeld said, Ferguson did not fit the profile of a community that would be a spark for civil unrest. The town has “pockets of disadvantage” and middle and upper-middle income families. He said Ferguson had benefited in the last five to 10 years from economic growth in the northern part of the county, such as the expansion of Express Scripts, the Fortune 500 health care giant.

The NYT has missed the story of the “apartment farms” in one corner of Ferguson that have become a slum of Section 8 renters.

“Ferguson does not stand out as the type of community where you would expect tensions with the police to boil over into violence and looting,” Mr. Rosenfeld said.

But the memory of the region’s racial history lingers.

In 1949, a mob of whites showed up to attack blacks who lined up to get into the pool at Fairground Park in north St. Louis after it had been desegregated.

In the 1970s, a court battle over public school inequality led to a settlement that created a desegregation busing program that exists to this day.

A Ferguson city councilman caused a stir in 1970 when he used racially charged language to criticize teenagers from the neighboring town of Kinloch for throwing rocks and bottles at homes in Ferguson. The councilman, Carl Kersting, said, “We should call a black a black, and not be afraid to face up to these people,” according to an article in the St. Louis Globe-Democrat.

Eventually blacks broke down the barriers in the inner ring of suburbs, and whites fled farther out. But whites fought hard to protect their turf.

In the mid-1970s, Alyce Herndon, a black woman, moved with her family to what was then the mostly white town of Jennings in St. Louis County. She said some of their white neighbors stuck an Afro pick in their front lawn and set it on fire. Ms. Herndon also recalled tensions flaring between black and white students at her school after the television mini-series “Roots” first aired in 1977.

For all its segregation and discrimination, St. Louis did not have the major riots and unrest during the 1960s that was seen across the country.

… “St. Louis never has had its true race moment, where they had to confront this,” said Ms. Bynes, the Democratic committeewoman. Without that moment, she added, blacks have been complacent when it comes to local politics. “I’m hoping that this is what it takes to get the pendulum to swing the other way.” …

That’s a lot of reporters who all missed what’s going on now because they were so focused upon the receding past.