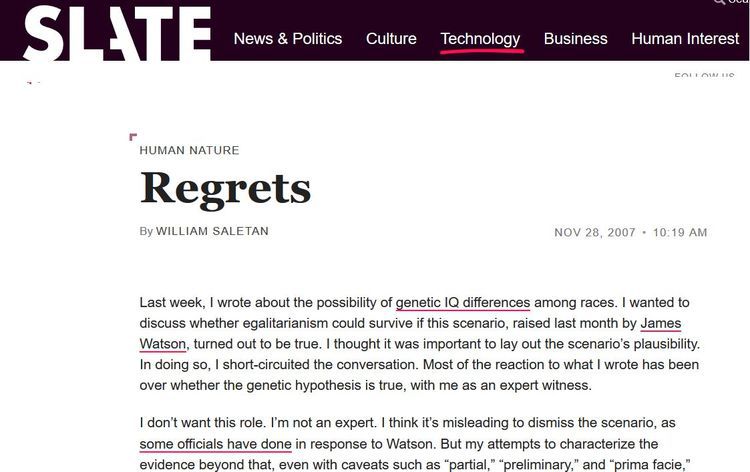 The Fulford File, By James Fulford | Saletan's Scuttle And The Curse Of Jacob Weisberg

As Steve Sailer noted in our blog [VDARE.COM's Unique Selling Proposition Restored!] Slate's William Saletan has scuttled for cover and issued "Regrets" for standing up for the basic facts of the IQ debate.

Saletan had previously done a three-part series that began:

"Last month, James Watson, the legendary biologist, was condemned and forced into retirement after claiming that African intelligence wasn't 'the same as ours.' 'Racist, vicious and unsupported by science', said the Federation of American Scientists. 'Utterly unsupported by scientific evidence', declared the U.S. government's supervisor of genetic research. "The New York Times told readers that when Watson implied 'that black Africans are less intelligent than whites, he hadn't a scientific leg to stand on.' "I wish these assurances were true. They aren't. Tests do show an IQ deficit, not just for Africans relative to Europeans, but for Europeans relative to Asians."

For the record, we are not dealing here with a "pseudoscientific" belief that blacks have a genetically lower IQ. We are dealing with a fact: blacks do have lower average IQ test scores. It's at least arguable that this fact is connected with another fact—what the United States Congress calls the "Achievement Gap," with reference to K-12 education and the No Child Left Behind Act, and which Stephan and Abigail Thernstrom call the "Racial Gap In Learning".

That part we know for sure—lower average test scores for African-Americans. That's why there has to be affirmative action, and why Jimmy Carter abolished the Civil Service exam in 1981, since they couldn't make African-Americans pass it at the same rates as whites.

In opposition, we also have a theory, an unproven and oft-refuted theory, that this disparity is not genetic, but caused by "white racism," or "stereotype threat," or something of that nature, even when there is no detectable evidence for it.

"But the thing that has upset me most concerns a co-author of one of the articles I cited. In researching this subject, I focused on published data and relied on peer review and rebuttals to expose any relevant issue. As a result, I missed something I could have picked up from a simple glance at Wikipedia. "For the past five years, J. Philippe Rushton has been president of the Pioneer Fund, an organization dedicated to "the scientific study of heredity and human differences." During this time, the fund has awarded at least $70,000 to the New Century Foundation. To get a flavor of what New Century stands for, check out its publications on crime ("Everyone knows that blacks are dangerous") and heresy ("Unless whites shake off the teachings of racial orthodoxy they will cease to be a distinct people"). New Century publishes a magazine called American Renaissance, which preaches segregation. Rushton routinely speaks at its conferences. "I was negligent in failing to research and report this. I'm sorry. I owe you better than that."

Bunk. As Ross Douthat pointed out in the Atlantic's blog, it seems implausible, "to the point of negligence," for Saletan not to know how hated Rushton is by people who don't like the answers he gets. And leaving J. Phillipe Rushton out of an article on IQ because you don't like his politics would like leaving Albert Einstein out of an article on relativity because you didn't like his (very left-wing) politics.

Saletan's point seems to be that the Pioneer Fund is evil in itself, and (this is called "Pioneer Fundophobia") and that Jared Taylor's American Renaissance, which the Pioneer Fund has apparently funded, is eviller, and thus Saletan shouldn't have cited Thirty Years Of Research On Race Differences In Cognitive Ability [PDF] by Rushton and Berkeley's Arthur Jensen without making a "guilt-by-association" political attack on Rushton.

If I were to do that to Saletan, I might blame him for working at the same webzine as open borders bigot Michael Kinsley (who recently wrote "nothing alien is human to Lou Dobbs") and Christopher Hitchens, who keeps plugging the War on Terror, while remaining an unreconstructed Bolshevik as far as any of America's previous enemies are concerned.

But what I'd really hold Saletan responsible for is working for Slate Editor Jacob Weisberg. Weisberg has a long record of hate speech and Stalinist suppression of debate.

Weisberg told the New York Times that, if he'd been paying attention (!), he wouldn't have allowed these (three!!) articles to go out without PC disclaimers:

"Jacob Weisberg, the editor of Slate, said that since Mr. Saletan is a senior writer, his posts went up without anyone there reading them. 'Given the sensitivity of the subject, Will's commentary should have been carefully edited in advance of publication, and it wasn't,' he wrote in an e-mail message. "Mr. Weisberg said he was disturbed by the casual 'what if' thought experiment and some of the sources Mr. Saletan cited. 'I wouldn't have stopped Will from writing on this subject, but I would have challenged him on these and other issues,' he wrote. "He added that a rejoinder by another Slate writer, Stephen Metcalf, was scheduled to be posted Monday. "Mr. Saletan said he was completely unprepared for the voluminous and vehement reaction. 'I did not mean to start a wildfire.'" I.Q. Debate Adds a Chapter Online, By Patricia Cohen, December 1, 2007

Of course, this is an unedifying spectacle: Weisberg betraying his writer's work on political correctness grounds. When Stephen Metcalf turns in his story on Monday, I'm quite sure it will contain the conventional wisdom on the nature vs. nurture question—as well as obfuscation over whether there's an IQ gap at all. He could probably just recycle his 2005 attack on The Bell Curve [Moral Courage | Is defending The Bell Curve an example of intellectual honesty? By Stephen Metcalf, Slate.com, Oct. 17, 2005]

But if you want to know what I meant about Jacob Weisberg having a "long record of hate speech", you need to read his 1995 New York Magazine review of Alien Nation, called Xenophobia For Beginners and subtitled "Peter Brimelow's 'Alien Nation" may do for immigrant bashing what Charles Murray's "The Bell Curve" did for racism—make it respectable."

"Not so long ago, the literature of egregious bigotry was treated like pornography. You had to send for it by mail—from backwoods presses that advertised in the classified sections of conservative magazines—or frequent the political equivalent of dirty bookstores. Today, you just walk into any Barnes & Noble. The Free Press set the precedent last fall with Charles Murray and Richard Herrnstein's The Bell Curve, which argued that blacks are genetically less intelligent that whites. Now comes Random House with Peter Brimelow's Alien Nation., another expression of intellectualized white rage that attempts to do for immigrants, and Hispanics in particular, what Murray did for blacks. Odds are it will enrage sensible folk, convince no one, and earn a small fortune."

It's difficult to call this anything but "hate speech". And, since it's an implicit call for censorship, it's actually much more dangerous than your basic actual hater, since there's not a lot that the average neo-Nazi can do to censor debate on national policy issues.

This is the problem with the IQ debate and the immigration debate—the Mainstream Media players either don't understand it, or get all emotional when they come to discuss it.

"Brimelow resorts to statistical abuses that would make a high-school debate blush. His first distortion is a chart that shows immigration in absolute numbers. By including those who applied for legal status under the temporary amnesty of a few years ago, he succeeds in producing a recent 'spike.'"

Brimelow answered this in the Afterword to Alien Nation's paperback edition.

"In fact, of course, the IRCA amnesties are included in the INS official figures. (Chart I, p. 30-31). And I discuss this problem and correct for them (Chart 2, p. 32) Even if Weisberg had not turned the page, he was present at my address to the Manhattan Institute when I pointed this out. To its discredit, New York refused to publish a correction letter from my researcher Joseph E. Fallon. "Interestingly, Weisberg was involved in a similar incident involving The Bell Curve. He wrote that at a conference sponsored by AEI the book's linking of intelligence and race was only raised (by him, although he didn't say so) when Glenn Loury, who is black, left the room. In fact, Juan Williams, who is also black, was present throughout."

In a letter to the WSJ at the time, Christopher DeMuth of AEI referred to this as "Jacob Weisberg's twisted article in New York magazine."

But that's just part of Weisberg's failure to "get it". There's also his emotional reaction to any discussion of the racial makeup of immigration.

Writing about Brimelow, Weisberg used the expression "in-your-face vileness," said Brimelow was "truly alarmed by off-whiteness of all shades," and that Alien Nation is "remarkable for its intellectual shoddiness."

It's not, and you can read it for yourself at no charge in PDF here.

One "shoddiness" charge was that the footnotes included "the least savory of anti-immigrant propaganda." Unfortunately, Weisberg didn't say which sources he meant, why they were unsavory, or whether it would be OK to quote them if they were "unsavory" but true.

And that's the question, isn't it? If the media establishment wants to believe one thing, and the facts say something different, who wins?

Well, before the Internet, the media establishment won. Now we do. (Assuming, of course, that we can raise the money to keep going. Weisberg's webzine is backed by the Washington Post.)

"My theory: Weisberg is a type, common in New York, whose verbal slickness exceeds his intellectual powers. Faced with an argument that disturbs him emotionally, he compulsively lies about it, like a lunatic exposing himself to a nubile woman."

My own theory: unless the media can face the facts, the general public has little chance of figuring out what the problem is with "disparate impact" policies, or the No Child Left Behind Act, or the immigration disaster.

Weisberg and his ilk are simply a curse upon America's public discourse.

And, as Steve Sailer said, we at VDARE.com are back to our "Unique Selling Proposition ", now that Slate Magazine is returning to race denial.

Weisberg prudently doesn't list an email address but you can send a letter to Slate here. And see below for details on how you can help us stay in business.

NOTE: VDARE.COM is no longer associated with the Center For American Unity, which plans to focus on litigation. We are grateful for their past help and wish them well in future. Our sponsor is now the VDARE Foundation, a 501(c)(3) charity.