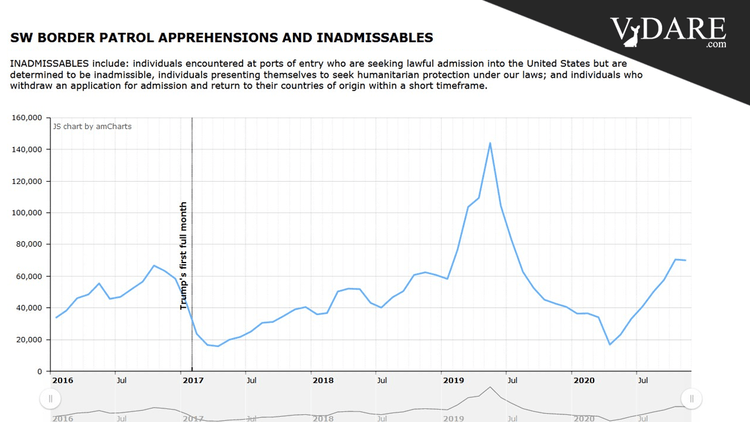 Border Patrol Arrest Numbers: Get Ready For The Biden Rush!

We've been predicting a "Biden Rush" for the border, in the event, now practically certain, of Biden taking office.

These are the latest crossing numbers from the Border Patrol website:

The Biden Rush isn't quite happening yet—Trump is still President, after all—but it's clearly on its way.

The DHS certainly knows this, and according to BorderReport.com:

Since Election Day, the Department of Homeland Security has been preparing for an onslaught of Central American migrants who are being driven by cartel organizations to try to enter the U.S. Southwest border, according to a South Texas congressman.

U.S. Rep. Henry Cuellar, D-Texas, told Border Report on Friday afternoon that he was briefed by DHS a couple weeks ago “that the bad guys are starting to promote to people of Central America and Mexico that ‘the border will be open; it will be different so start getting ready to come.'”

Cuellar is vice chairman of the House Appropriations Homeland Security Subcommittee and privy to information on the agency’s maneuvers and preparations as it relates to anticipated expenditures and federal costs.

Cuellar said drug cartels are “promoting and staging” migrants in large numbers to begin heading north, making them believe that a White House run by Democratic President-elect Joe Biden will be much more lenient than the Trump administration with regards to asylum claims.


Cartels telling migrants ‘border will be open’ when Biden takes over, Texas Democrat says https://t.co/3QjfKvyvEj The cartels know that because they read it on Biden's campaign website.

This is true—see, most recently  Biden Plans Massive Immigration Treason In His First 100 Days. But Patriots Can Fight Back.

And for more, see: