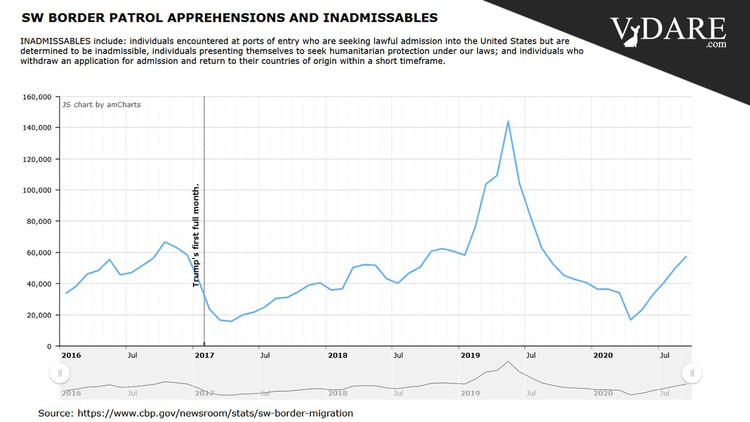 See also:  Abolishing Immigration Control: Biden Wants To Reverse ALL The Gains Made By Trump....And America

The Seattle Times has an article which says that Biden, assuming he's confirmed as President, will stop building the Wall:

WASHINGTON — Mexico never paid for any of it. It’s less than half finished. And on Jan. 20 or soon thereafter, construction will come to an abrupt halt on the “big beautiful wall” that President Donald Trump promised to build along the U.S.-Mexico border.

The project has cost $15 billion so far, most of it diverted from the military budget after Congress refused to provide full funding.

President-elect Joe Biden vowed during the campaign to kill the project, but leave in place whatever the Trump administration leaves behind.

At the moment, that’s about 400 miles worth of levee wall and 30-foot-tall bollard fencing, though nearly all of that mileage already had some sort of barrier before Trump took office. Only 12 miles did not.

The rest is upgrade or replacement for shorter, less sturdy fencing, or a second layer of barrier meant to slow migrants and smugglers long enough for the Border Patrol to arrive.[More]

This is a major failure by Trump, and a major success by the Treason Lobby, Republican AND Democrat. (Obviously making Mexico pay for the Wall would require GOP Legislators to pass a tariff or a tax on remittances—they wouldn't even pass appropriations to pay for it.)

The story is a gloat by the writer, and includes a quote from Mexican-American Democratic Congressman Henry Cuellar, who is obviously not loyal to the US:

“It was a referendum on the wall,” Rep. Henry Cuellar, a Laredo Democrat, said of the election. Cuellar has fought on the Appropriations Committee to stymie Trump budget maneuvers that sapped billions from military spending for his pet project.

Biden does not plan to tear down existing wall, which is why Ann Coulter kept stressing how important the Wall was—Biden can reverse travel bans, and tell refugees it's open house, but he couldn't tear down a wall.

And Mexican illegals are already responding to the threat/promise of a Biden presidency by crossing illegally.

Here's our chart of the September Border Crossing numbers: