How many intellectuals in 2020 can figure out the point of this 1939 cartoon? 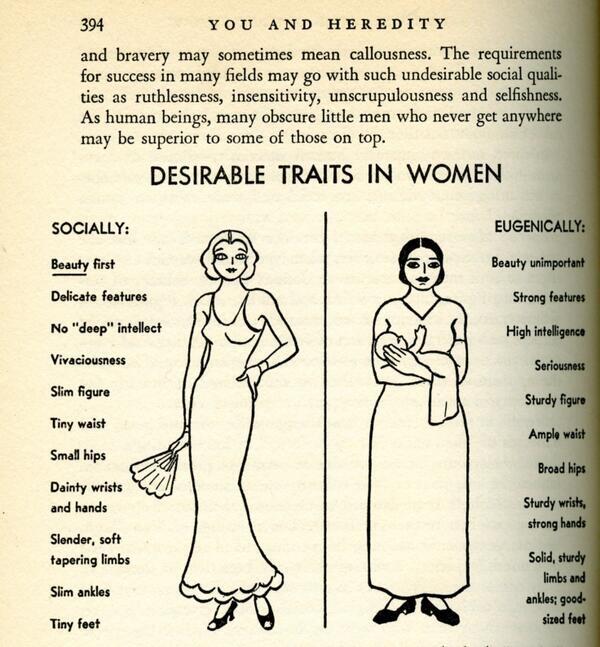 Source: "You and Heredity: Genetics and the Inheritance of Musical Talent," by Amram Scheinfeld

Amram Scheinfeld, a comic‐strip artist who became a widely read science writer on genetics, died yesterday at University Hospital. He was 79 years old and lived in Greenwich Village.

Mr. Scheinfeld’s first book, “You and Heredity,” published by Stokes in 1939, was credited with being the first accurate interpretation of the science of human genetics for the general public.

Among its features were illustrations by the author and a report on Mr. Scheinfeld’s own study of the inheritance of musical talent that led him to conclude that true musical talent was probably inherited and required the the [sic] coexistence of several genetic units, or genes.

Personal information was obtained by Mr. Scheinfeld from 36 outstanding instrumentalists, 36 principals of the Metropolitan Opera and 50 students of the Juilliard School of Music. Another study was made of children of musical artists.

“You and Heredity,” written with the the [sic] technical assistance of Dr. Morton Schweitzer, was praised by scientists in the United States and Britain, where it was prepared for publication by J.B.S. Haldane.

As the science of human genetics grew, Mr. Scheinfeld produced expanded editions. “The New You and Heredity” was published in 1950. He also wrote “Your Heredity and Environment,” published in 1965 and given The Saturday Review Anisfield‐Wolff award.

In the meantime, Mr. Scheinfeld had written “Women and Men,” a 1944 analysis of sex differences that foreshadowed many issues of the feminist movement.

Mr. Scheinfeld’s wife, Dorothy, said yesterday that her husband had completed another book before his death. It is called “The Human Sexes” and will be published next year by Alfred A. Knopf.

Mr. Scheinfeld was born in Louisville, Ky., a son of Rabbi Solomon I. Scheinfeld and the former Sanna R. Sachs.

… He also produced a daily column, “Snappy Shots,” for The New York American, drawing from life to accompany his humorous profiles of well‐known people.

“Meeting all these big‐shots, close‐up day after day,” Mr. Scheinfeld wrote to his family, “has set me thinking about what makes some people rise to the top, and so many others — the nobodies, failures, criminals I’d met as a reporter —stay at the bottom.” His speculations led to his interest in heredity.

Surviving is his wife. There will be no service.

This 1939 book “You and Heredity” by science cartoonist Amram Scheinfeld, the son of a rabbi, is a good example of how popular eugenics was among Jews before WWII, a fact that has been completely retconned down the memoryhole since the days of Stephen Jay Gould.

From my 2014 book review of John Glad’s Jewish Eugenics:

The most striking revelation is that, contrary to the current impression, Jews largely approved of eugenics until the end of the 1960s. (The most effective opponents tended to be Catholics, such as G.K Chesterton, author of 1922’s Eugenics and Other Evils.) Glad quotes endless Jewish spokesmen from the first seven decades of the 20th century to the effect that Jews had been practicing eugenic marriages for 3,000 years. The medical profession, which was largely secular and progressive, was enthusiastic about eugenics, and there was little evidence that the sizable number of Jewish doctors objected.

Rather, Jews didn’t contribute much scientifically to this quite productive movement because their city skills took them in other directions, such as becoming doctors rather than naturalists. To contribute to the Darwinian mainstream, it helped to be a smart country boy who grew up interested in plants, animals, and domestic animal breeding. Gould’s archrival Edward O. Wilson is a representative American version, an Alabama lad who couldn’t get enough of ants.

With that in mind, can you figure out the point of Scheinfeld’s cartoon?