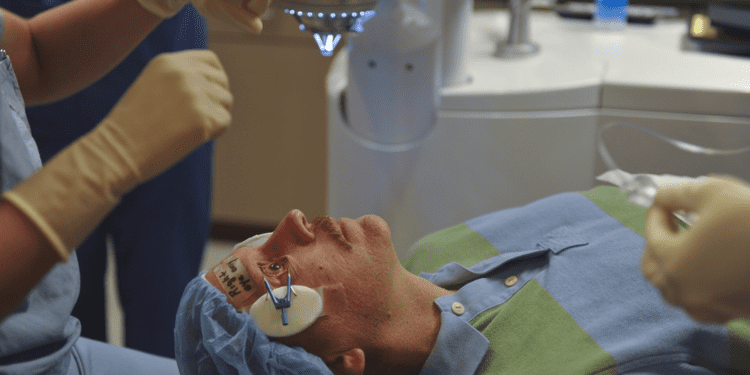 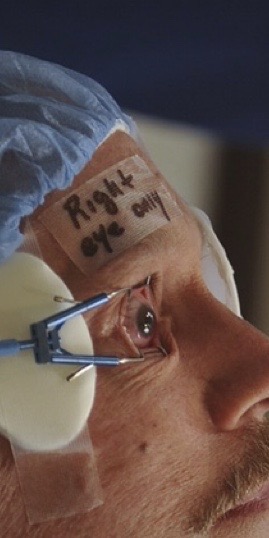 Under the heading of Tenure for doctors has its limits, Overlawyered's Walter Olson writes

From Institute for Justice’s Short Circuit newsletter: “How many times can an eye surgeon accidentally operate on the wrong eye before his surgical privileges are revoked? Three is the magic number at the Murfreesboro, Tenn. Veterans Affairs hospital. Sixth Circuit: And the revocation does not violate the due process of law.” [or constitute retaliation under employment discrimination law; Ahad v. Wilkie]

Wrong site surgery is really bad, and hospitals are adopting checklists and procedures to stop it. (In this detail from the stock photo above, you can see the patient has been labelled for surgery on the right eye only.)

However,  the VA's record as an institution for the care of veterans is horrifyingly bad. (Fred Reed has had repeated personal experience with its eye doctors.)

One reason: they hire a lot of cheap foreign labor. That's bad enough if you want construction done right, it's much worse if you want eye surgery done right.

Dr. Khandakar Ahad began working as an ophthalmologist at a Veterans Affairs hospital in 1992. Since then, he has performed wrong-site eye surgeries—operating on the healthy eye—several times. Three days after his last misstep, the hospital launched an investigation, after which it revoked Ahad’s surgery privileges. The revocation of privileges limited him to non-surgical patient treatment, but it did not reduce his pay or change his formal position. After unsuccessfully challenging this decision internally and after filing a complaint with the Equal Employment Opportunity Commission, he filed this lawsuit, claiming the revocation amounted to (1) retaliation under Title VII for a lawsuit he filed three years earlier against the hospital and (2)a due process violation. The district court rejected the claims as a matter of law.

The reason doctor Ahad can sue for Employment Discrimination is because he's a non-white immigrant. He graduated from Dhaka Medical College, which is in Bangladesh, in 1975. He's been working for the VA since 1992, and has 43 years of experience, which for an eye surgeon is too many, i.e. some of his mistakes can be explained by age. But because he's a non-white immigrant, he has the privilege of suing the system for firing him—something they should have done earlier, and might have done, if he was a white immigrant.

Just another day in Equality Land!