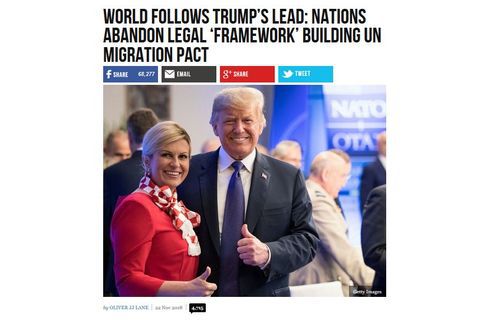 The UN Migration Compact is a mortal threat not just to the independence of nations around the world, but to freedom of speech [The UN's plan to end civilization, by Gregory Hood, American Renaissance, October 24, 2018]. This is nothing new, as the UN has a number of poisonous initiatives that nations sign up for seemingly without much analysis. Yet this particular plan is unusual because a number of nations are now pulling out of it at the last second. If anything, the trend seems to be intensifying.

President Trump can claim credit for this, as he was the first to pull out of itpoverty and violence [World follows Trump's lead: Nations Abandon Legal 'Framework' Building UN Migration Pact, by Oliver Lane, Breitbart, November 22, 2018]. Yet he has not been the last. Thus far, the following nations have pulled out.

Other nations have made vague indications that they will pull out, but their final stance is unclear. These nations include Bulgaria, Italy, and Croatia. Debate continues in Switzerland, Greece, Belgium, the Netherlands, Slovakia, and Estonia. Each country that pulls out is a major victory, as it encourages others to take the step.

President Trump deserves credit for this, as this treaty likely would have won worldwide approval were it not for him.

Of course, it doesn't change the fact that the vast majority of First World nations still plan on signing it. Much more needs to be done, and the global establishment is still against us.