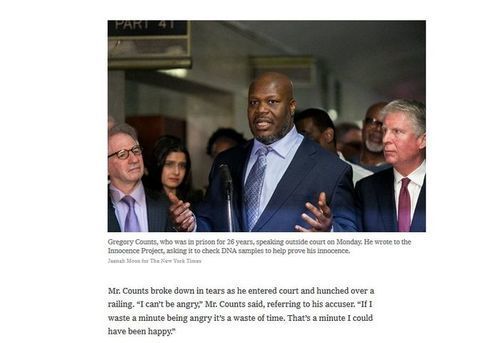 Black Men Falsely Imprisoned For Rape—What Color Was Their Accuser?

Instapundit links to this story with a "TEACH WOMEN NOT TO LIE ABOUT RAPE" headline, and says, regarding the unnamed accuser whose now-recanted testimony put two men in jail for years "Seems like there’s no reason to keep her name secret now."

The story, originally from the New York Times, is 26 Years Later, Justice for Men Imprisoned for a Bogus Rape.[By By Jan Ransom May 7, 2018

It's true that the NYT has a record of including false rape accusers under the same protocol as actual rape victims. Crystal Gail Mangum, the black woman who committed the Duke Rape Hoax, was not mentioned by name in the NYT until 2010 (when she was charged with murder) although the hoax itself had been exposed in 2007.

But the woman has apparently "not been identified" by the authorities, rather than Times. The story starts like this:

The woman, dirty, disheveled and in tears, ran over to a patrol car parked along a Harlem street in the early morning of Jan. 18, 1991. She told police officers she had been kidnapped at knife point near her home in Queens and raped by three black men, whom she identified.

Before the end of the month, the police arrested two of the men she had named — Gregory Counts, then 19, and VanDyke Perry, then 21. They were charged with rape, sodomy, kidnapping and criminal possession of a weapon, according to court records. The third man was never caught.

Investigators had no physical evidence. Semen recovered from the woman did not match the two accused men. The prosecution’s case relied heavily on her testimony, which was inconsistent. The defense argued the woman, a recovering crack addict, fabricated the story to protect her boyfriend, who had shot Mr. Perry two months earlier and was wanted by the police, court records show.

Yet, in 1992, a jury convicted Mr. Counts and Mr. Perry on all counts except for the weapons charges. Mr. Perry ended up serving 11 years in prison, Mr. Counts 26.

On Monday, both men walked into a packed courtroom to hear the Manhattan district attorney, Cyrus R. Vance Jr., ask a judge in State Supreme Court to vacate their convictions based on newly discovered DNA evidence and the woman’s decision to recant her testimony.

My question is "What color was their accuser?"

This is a case about race to Barry Scheck of the Innocence Project, who is quoted as saying “This was a particularly dark time in New York City during the crack epidemic...At this point in time in New York City, people were scared of teenagers who looked like my clients.”

He's right—teenagers who looked like his clients murdered thousands of New Yorkers every year in the 90s, and robbed and raped tens of thousands.  But what color was the unnamed woman who lied?

Well, I've bold-faced some things above that indicate she might be part of the same community as her victims, and I note that one of the victims seems willing to forgive, but in the end, we have to go back to the old rule, first proposed by John Derbyshire in 2002—if she were white, they would have told us.