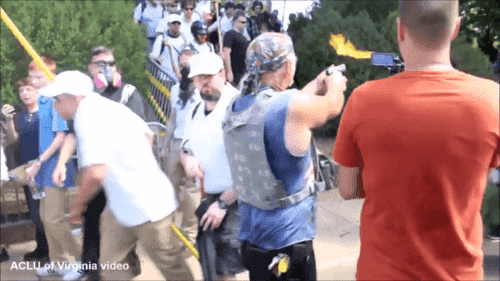 After a sentencing hearing today for Unite the Right defendant Richard Preston, a decision was deferred until Aug 21st pending further investigation into the defendant’s background. In the meantime he’s been granted leave to go to Maryland so long as he signs an “Extradition Waiver”.

The Preston case involves him firing a warning shot into the dirt near flamethrower attacker Corey Long. Yesterday, he’d pled No Contest to Discharging a Firearm Within 1,000 Feet of a School. Following testimony by friends, including black blues musician Daryl Davis, Judge Moore acknowledged Preston “is a complicated man” and case “involves a lot of moving parts”.

During the hearing multiple witnesses testified that prior to the gunshot they’d been sprayed with flammable paint thinner by Corey Long before he fired an improvised flamethrower towards a crowd of people. In the words of one witness, “I could have been turned into a human torch.” and “(Richard Preston) saved my life.”

While there is no “warning shot” exception to the Virginia law (hence the No Contest pleading) the judge seemed sympathetic of the situation.

Deandre Harris, who participated with Corey Long in burning Confederate flags with the improvised flamethrower, ducked a subpoena and failed to appear in court. Corey Long himself has disappeared and could not be subpoenaed.