The Fulford File | So Why Doesn’t The “Broken Windows” Theory Apply To Illegal Aliens?

In Alabama, where the Treason Lobby is very active these days, there was a protest this week by a bunch of illegal Dream Act kids, all of whom were arrested—and none of whom are being deported: “All 13, mostly college and Latino, people arrested for sitting down in the middle of the street in front of Alabama's Statehouse Tuesday during a protest of Alabama's tough immigration law have been released from jail Thursday.

“Ten were released on $300 bond each Thursday afternoon from the city jail and left out the front door of the Montgomery Police Department chanting "undocumented, unafraid." Attorney Mike Winter says the final two were let out later

“…A spokesman for the federal Immigration and Customs Enforcement said the agency hasn't lodged a detainer against any of the protesters.” [Emphasis added]

Needless to say, the Mexican government would not tolerate foreigners demonstrating in Mexico—even if they were there legally.

But it’s all too familiar in the U.S. After the Rodney King Riots the first Bush administration  refused to do anything about the rioters who were illegal immigrants:

"At a Cabinet meeting today, Attorney General William P. Barr said nearly one-third of the first 6,000 [Los Angeles] riot suspects arrested and processed through the court system were illegal aliens, according to a senior Administration official. Barr has not proposed any special effort to have them deported, a Justice Department spokesman said."

And it’s in blatant contradiction of the much-celebrated “Broken Windows” theory of law enforcement. Stemming from a 1982 article by neoconservative political scientist James Q. Wilson [BROKEN WINDOWS: The police and neighborhood safety(PDF), Atlantic Monthly, March 1982], this theory holds that if you allow visible signs of lawlessness, even minor ones, you will get more lawlessness, whereas a determination to enforce the law against obvious but minor crimes can bear fruit in controlling the more serious crimes. Its application is widely credited with significant crime reduction

In New York in the 1980s, the authorities would say they couldn’t be bothered to arrest people committing misdemeanours and public nuisances in the streets because there was so much serious crime. This gave criminals a sense of immunity, and citizens a sense of helplessness.

Of course, to an unspoken extent, the authorities didn’t even want to stop misdemeanors, because they were emotionally on the side of the criminals. Here I’m looking directly at David Dinkins.

When New Yorkers elected Rudy Giuliani, and started cracking down on some of this stuff, they experienced a massive drop in crime.

But why would this not also apply to immigration enforcement? The (federal) authorities are refusing to arrest illegals who are plainly visible, claiming that they’re focusing protecting the country from major criminals. So they can’t find time to arrest people who are publicly protesting, saying “we’re illegal” or “you can’t deport us all”.

The federal government is in effect saying that, after all these years of non-enforcement, they’ve let the problem grow so big that they can’t do anything.

Of course, we now know, thanks to Federale’s reporting on the Obama Administrative Amnesty, that the government doesn’t want to do anything.

All right, if you feel you can’t deport 20 million people, how about one million? Half a million? How about one guy, standing on a street corner, shouting “I’m illegal!”

Recently we’ve seen Jose Antonio Vargas publish My Life as an Undocumented Immigrant [New York Times, June 22, 2011] and set up a foundation called DefineAmerican  [Email it](with George Soros’s money) to promote more lawbreaking. But has he been arrested? No! He’s reporting from Birmingham, Alabama now. For more on Vargas, see

You can add to that the story of illegal alien activist Isabel Castillo, who got an honorary doctorate from the University of San Francisco, giving the commencement address. [See Isabel Castillo Gets U. Of San Francisco "Honorary" Doctorate—For Being Illegal!By A. W. Morgan]

She wasn’t always that open about it, though. She told the New York Times:

“‘At first, I'd only allow the media to shoot my face turned away and only my first name. And then it just progressed. I said, “O.K., use my face and you can say I went to a local university.” Then it was, “I graduated from Eastern Mennonite University and I'm Isabel Castillo.”’”

VDARE.com constantly gets email reporting that someone is illegal, and asking us to do something about it. Of course, we can’t. We can tell you how to report illegals to the authorities. But we can’t make the authorities act.

Georgia immigration patriot D. A. King tried it in 2003. Illegal aliens had been featured on the front page of his local newspaper, the Marietta [Ga.] Daily Journal. [Immigrants faced peril in pursuit of better lives, August 24, 2003, By Beth Anderson]and he went to the ICE building to report them.

He discovered that the agent, a woman with a Hispanic name, hadn’t seen the story, hadn’t heard of the illegal alien demonstration at the Georgia Capitol until the actual day it happened, hadn’t done anything about it, and finally, when he asked her if her office was going to do anything about the “Immigrant Workers Freedom Ride” when it came to Georgia, he discovered she hadn’t heard of it at all.

The Immigrant Workers Freedom Ride was a huge national deal, sponsored by the AFL/CIO. It was in all the papers (which the ICE agent apparently didn’t read) and on TV (which she must not have been watching, at least not the news).

In the past, though, there have been some heartening cases where bureaucrats will actually act on public information. In Columbia School Of Journalism Flunks Immigration [February 28, 2003], Joe Guzzardi wrote about a case where an MSM sob story about illegal alien Julio Granados [Heart without a home, by Gigi Anders, Raleigh News and Observer, March 8, 1998] actually led to his deportation. 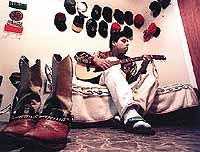 On March 24, 1998, immigration agents showed up at Granados’ place of work, waving copies of the News and Observer article—which had his picture in it—arrested him and five others, and got him sent home.

This led to another predictable result—journalists whining about the ethics of the thing, which was what Joe’s story was about: see the egregiously mistitled Good Story, Bad Result |A profile puts the subject at risk , By Barry Yeoman [email him] Columbia Journalism Review, July/August 1999

Lucy Hood writes about a woman named who sounds just wonderful. Gloria Rubio is, according to Hood

“Rubio, an undocumented immigrant born in Mexico, is also diligent about paying her taxes. She told reporter Ginnie Graham of the Tulsa World that she considered it a demonstration of loyalty and support to her adopted country.” Yes, that’s right— reporter Lucy Hood has never heard of tax refunds! But never mind. The point is that Gloria Rubio was a spokeswoman for a tax service (the Tulsa Community Action Project Intercultural Tax Service) that helped illegals demonstrate their “loyalty and support”, for the explicit purpose of getting them EITC. Equally credulous reporter Ginnie Graham mentioned her name in a story in the Tulsa World, [Illegal Immigrants pay taxes, March 16, 2005] after which, according to Hood

“About a month after the story ran, agents from U.S. Immigration and Customs Enforcement showed up at Rubio's house. They arrested her and began deportation proceedings after ICE's Oklahoma City office received an anonymous letter containing a copy of the story.

“A year later, Graham still wonders what she could have done differently.”

She did fine as far as I’m concerned.

So, in spite of all the Treason Lobby’s efforts, the law has sometimes been enforced. Some “Broken Windows” have been fixed. But it was not easy to get the bureaucrats moving—even before Obama.

Here’s something to think about. The MSM wants to preserve the anonymity of illegals, and cries when it fails to do so. But the person who sent the newspaper story about Gloria Rubio to ICE did so anonymously.

If that person hadn’t done so anonymously, would the same reporters have made his name and address public—as often happens to people the Treason Lobby considers “Hate Groups”?

Because the “Broken Windows” theory can’t work if it’s not even safe to report Broken Windows to the authorities.