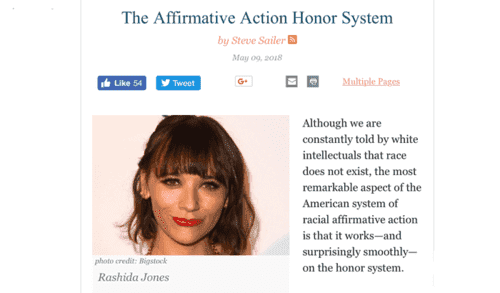 Although we are constantly told by white intellectuals that race does not exist, the most remarkable aspect of the American system of racial affirmative action is that it works—and surprisingly smoothly—on the honor system.

You might assume that if race were an arbitrary social construct, then America would be beset by constant disputes over who qualifies to benefit from racial quotas. If race is all just Foucauldian mind games, then surely blacks must be getting exploited by whites, right?

And yet, Americans don’t actually have much trouble agreeing on who qualifies as black and who does not.

That is not widely understood, though