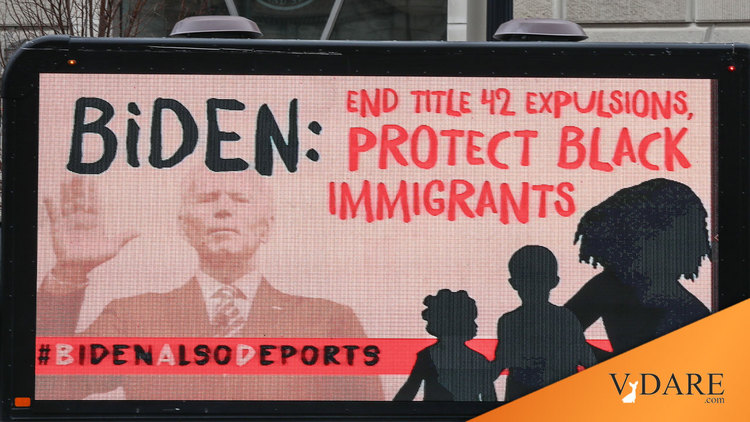 A while back, responding to a reader who said "have you forgotten slavery?", et cetera, I wrote that slavery is an African custom that I’ve condemned, but it was abolished in the US 150 years ago. It’s now only practiced in places like Africa and Haiti—although some African and Haitian immigrants insist on practicing it illegally in the US.

I mention this, because first, we recently had to point out on Twitter that when Wally Adeyemo, born to Yoruba parents in Nigeria, was assigned to develop an anti-white "civil rights" strategy at the Treasury Department,  Steve Sailer said Adeyemo "must know all about the horrors of American slavery and Jim Crow." That's Steve's little joke, but if you're a Yoruba whose ancestors stayed in Africa, you're definitely descended from slave traders, not an American Descendent Of Slavery.

That also applies to the members of Haitian Bridge Alliance, who are in Roll Call Magazine trying to use Juneteenth to keep them from being deported for being illegal immigrants [Black immigrants push for protections as Juneteenth is honored, by Suzanne Monyak, June 18, 2021].

Their justification for not being deported: they come from "hellhole" countries:

“We knew if we were sent back to Cameroon, we would be killed. Cameroon is temporarily unsafe for us" — Susan, Cameroonian CASA member

Of course, the "hellhole" conditions are caused by the people, not "colonialism" or other such excuses.

The countries being considered as places where America is not allowed to send illegals back to include Cameroon, Mauritania, South Sudan, Somalia, the Bahamas, Ethiopia and Sierra Leone.

These are mostly places that sent slaves to the US, and there's an astonishing quote from one activist named Diana Konaté, born on the Ivory Coast, another historic exporter of slaves:

Konaté said many of the rights she has in the U.S. as a Black immigrant are the “direct result of the ongoing and continuous fighting that Black people in this country have been engaged in for centuries.”

Ahem! They've only been engaged in this struggle because her ancestors sold them to men with ships.

Remember,  slavery is an African custom—they're still doing it—white people's contribution was first the ocean-going ships that brought it, and its victims, to America, and later abolition.

African immigrants don't deserve special considerations because of America's history of slavery. If anything, they owe reparations.