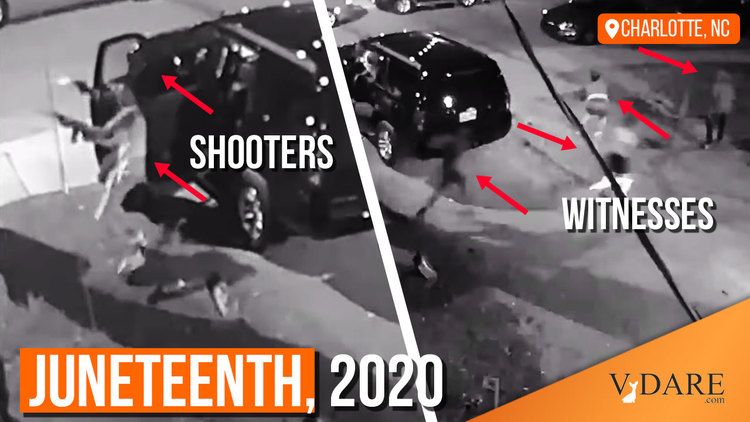 1 Year After 4 Murdered, 10 Wounded On Juneteenth In Charlotte, NC, No Black Witnesses Have "Snitched" On Black Gunmen

Earlier: Scores Of Black Women Twerk On Ambulance As It Tries To Get Through Crowd At Juneteenth Event To Transport Black-On-Black Shooting Victims To Hospital

Do you want one story to prove Black Lives Don’t Matter?

Here you go. Pay attention. There will be a quiz at the end.

Charlotte-Mecklenburg Police Department officials said at a recent press conference they suspect potential witness are fearful of retaliation. But some Charlotteans say witnesses haven’t come forward because of the police department’s poor relationship with the city’s Black community.

“People aren’t going to talk to someone they can’t trust,” community activist Gemini Boyd said. “It’s just that simple. They are watching people across this nation being murdered by the police. It doesn’t make no difference if it’s in Georgia, Kentucky or … Minnesota where Mr. Floyd was murdered.”

George Floyd’s death at the hands of a Minneapolis police officer sparked protests in Charlotte and across the country last month. The June 21 shooting on Beatties Ford Road came during Juneteenth weekend.

Celebrations began the Friday before, but by Sunday night the atmosphere shifted from joyous to deadly when shots rang out. Four people were killed, while at least 10 others were either struck by bullets or cars at the scene.

Within hours, police officials began asking Charlotteans to come forward with any and all information to help with the Beatties Ford investigation. Boyd said he doesn’t expect much of a response.

“No, people aren’t going to trust CMPD,” he said. “You need (to) trust no one you think might kill you the very next day.”

Even in the chaos of that night — with bullets “coming from everywhere” — the actions of one CMPD officer on Beatties Ford reinforced for Boyd the fragile and tenuous relationship between the police and the Black community.

And he captured it on video.

Boyd remembers the shots came out of nowhere. Days later, he would still be trying to figure out why he was even there.

“But you know, sometimes things happen for a reason, and I think the reason I was there was the video,” Boyd said. “That’s the only thing I can think of. If I wasn’t there the video would (have) never been taken.”

Boyd, who works with The Bail Project to combat the symptoms of mass incarceration, began livestreaming on Facebook when he arrived at Beatties Ford Road that Sunday night around 12 a.m. About 500 people had gathered, he said.

While some have called it an “impromptu Juneteenth block party” or “street party,” Boyd says it was “just people hanging out.” He was only there for about nine minutes before nearly 200 rounds were fired into the crowd.

“Bullets were coming from everywhere,” Boyd said. “It was just chaotic. It was almost like a mass shooting.”

His video shows bystanders scattering, running in different directions as shots ring out.

Boyd lay between two cars, and when the gunfire finally stopped, he tried to get through the crowd to help. He reminded people to check for pulses of those lying on the ground. He directed police officers and medics to people who needed help.

About 15 minutes after he began streaming, Boyd’s video shows a police officer walking through a parking lot, pointing a rifle at bystanders, some of whom quickly put their hands in the air.

“Get the f— back!” the officer can be heard yelling, as screaming and car honking continues in the background. Gunfire had, by that point, subsided.

Boyd unsuccessfully implored other officers on the scene — who were tending to the victims, blocking traffic, and helping ambulance arrivals — to intervene.

Charlotte is days away from the first anniversary of a mass shooting along Beatties Ford Road that claimed four lives, and while developments have emerged, no arrests have been made in what police call a “frustrating” case.

“I had already been announced as the next police chief, and then going on to be sworn in, this was one thing that I saw as a cloud,” Charlotte-Mecklenburg Police Chief Johnny Jennings said during a news conference Wednesday. “It was frustrating from the beginning early on.”

Around 12:30 a.m. on June 22, 2020, gunfire erupted during a block party in celebration of the Juneteenth holiday. Nearly 200 shots were fired in the 1800 block of Beatties Ford Road, near Catherine Simmons Avenue, police said. Four people died, at least 11 were injured and dozens were traumatized.

Even with community members coming forward over the past year, Jennings said “it’s frustrating” not being able to “put those final pieces of the puzzle together” to make any arrests.

“A lot of times when we have that many people present it’s sometimes challenging to get that critical piece of puzzle,” he said. “There’s so many small pieces that people may not realize how critical their part is in seeing the full picture.”

The last development announced came in November when CMPD released a minute-long video from the day of the shooting.

Police asked for the public’s assistance in identifying two gunmen seen firing a pistol and semiautomatic rifle in the video.

“It’s a miracle we came out and with what we did and it wasn’t more traumatic than what’s occurred … when you see the total disregard and recklessness for human life,” Jennings said in November.

A year later, no one will come forward to name the black shooter(s).