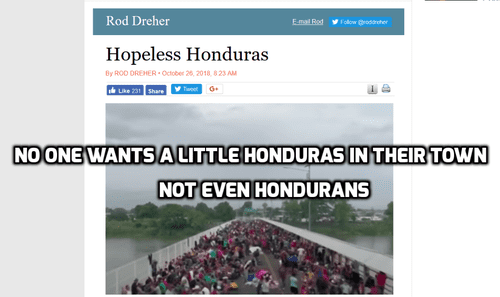 Some months ago, President Trump may—or may not—have referred to the dysfunctional, Third World sources of our immigration miasma as "s---hole countries."  Followed, as night does day, by ritual pearl-clutching and harrumphing from the virtue-signaling ranks.

A commenter at a current piece about The Caravan by PowerLine's Paul Mirengoff provided more-genteel phrasing for the same idea.  Someone using the moniker "The Regulator of Soul" wrote:

I don’t want a Little Honduras in my city. Who would? Not even Hondurans want to live in Honduras.

That's a good way of putting it, without the use of scatology.

Meanwhile, Rod Dreher, writing at The American Conservative, presented a letter from one of his readers, an American who's lived and worked in Honduras for ten years.  The piece, Hopeless Honduras [October 26, 2018], is well worth reading in full.  Here is its essence:

A poor Honduran lives his life with little to no hope of ever achieving anything approaching financial stability. The people I know make their livings off of garbage collecting, selling unripened bananas and day-laboring at construction sites. I’m particularly close with a group of young men and older boys that live in and around the municipal garbage dump of La Ceiba. In many respects they are some of the happiest, most worldly-wise, most realistic people that I have ever met. Not much upsets them, they laugh often and give fully of themselves to whoever asks.

They also have absolutely no hope of a better future. They work hard, incredibly hard; rising before dawn to load up on either the banana or garbage trucks and not finishing work until late in the evening. For their efforts they manage to bring home about $5 a day with which they are expected to either help support their parent(s) or the family that they’ve started.

Some in the garbage dump community also manage to study in the local public high school on the weekends. Their hope is that if they can manage to graduate high school, perhaps even college, that they will be more attractive to local businesses and thereby land jobs as sales clerks, cashiers or bank tellers. I haven’t the heart to tell them that all of their effort will likely be for naught as businesses simply don’t have the available positions to fill and that even if they did, business owners would never consider a public high school education worth anything compared to one from a private high school.

The letter spurred abundant responses from other readers (110 as I write this), and several of these strike me as worthy of wider exposure.  Commenter "asdf" wrote:

What the Hondurans are fleeing … is other Hondurans.

This is what life in a country with a low average IQ is like. It just is. It’s not unique to Honduras. It’s true everywhere. It’s even relatively true within parts of the USA with low average IQs (think Detroit).

If the caravan makes it here they will make their lives better, but our lives worse. The more Hondurans that come, and more America will be like Honduras. If enough Hondurans (or global south equivalent) come then America will be exactly like the place they came from, since it is populated by the same people.

The hope of these Hondurans is that they can move away from other Hondurans, and that those Hondurans won’t follow them, because if they do they will be right back to square one.

Only by becoming a minority within a superior majority can they hope to improve their lot, basically by surviving on our crumbs. Since even our crumbs are better than anything they are capable of making on their own. This is by definition not a scalable solution.

Of course we should have compassion for the Honduran people, but I do not understand how their failure to achieve or maintain Western standards of civilization is our problem, why anyone thinks that they would be more civilizationally-capable if they were transplanted en masse into the United States, or what (short of recolonizing the place) it is we’re supposed to do in order to “fix” Honduras.

Mutatis mutandis for every other “developing” country; the fundamental reason Honduras is the way Honduras is, like the reason Somalia is the way Somalia is, and the way Haiti is the way Haiti is, and so on, is because of the people there. The only thing we will achieve by bringing thousands or millions of them into the United States is to make the neighborhoods they settle into, and eventually the United States as a whole, indistinguishable from the places they’re fleeing.

And commenter "Seoulite" raised what may be the ultimate consideration:

The problem with your reader’s comment is that hundreds of millions, if not billions, of people around the world could tell similar stories. So we must come to the real question.

Do the global poor have any moral claim on wealthy countries? If yes, how much? Are wealthy countries required to give until there is nothing left to give? Where and when is the line drawn? Because if the only other answer is “solving global poverty” then that’s no answer at all.

It may well be the case that global inequality is now untenable, because of the internet, ease of travel, ease of communication, etc. It may no longer be possible for some countries to be very rich and some to be very poor without huge movements of people.

If being poor now qualifies one as a refugee, then morally there is no limit to the number of people who must be clothed and fed. Who will pay? The people born in wealthy countries, who are no more at fault than anyone else. So I suppose Americans should be forced to pay for the vagaries of fate? For the injustice of nature itself?

These questions are at the heart of this movement of people. A border wall won’t answer them.

Seoulite's opening paragraph brings to mind the evergreen "gumballs" video by Roy Beck of NumbersUSA.  Readers not familiar with this classic should spend the necessary six minutes watching it RIGHT NOW.

And everyone who's ever watched it should be spreading its link around at every opportunity, especially now with "The Caravan" in the news.