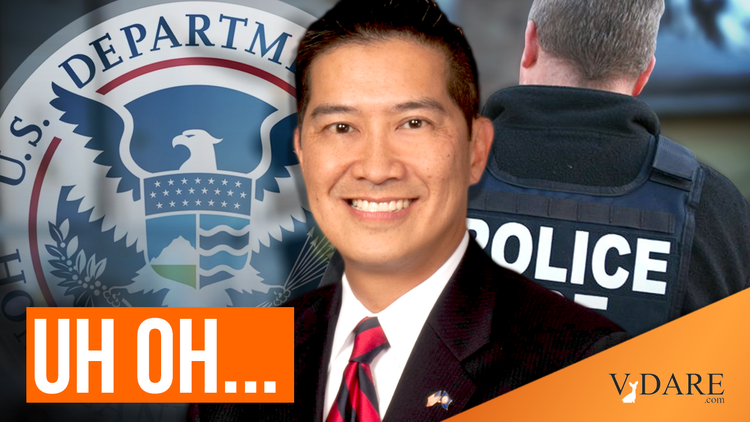 Tony Pham, current Principal Legal Advisor, to U.S. Immigration and Customs Enforcement (ICE), has been nominated to replace Matt Albence, current acting Director of ICE. Albence is an old Border Patrol and legacy Immigration and Naturalization Service (INS) hand, but was unable to unseat the insubordinate legacy U.S. Customs Service (USCS) Deep State saboteurs in ICE SVU and develop a coherent immigration enforcement program for the interior. It does not appear Pham is legally qualified for the position.

While I presume that SAUSA is prosecuting immigration crimes, that is not explicitly stated. A SAUSA is generally an attorney hired by a USAO to prosecute specific crimes, as opposed to a regular Assistant U.S. Attorney (AUSA), who is hired to prosecute all criminal offenses in a particular USAO. Usually a SAUSA prosecutes Social Security crimes or immigration crimes, as SAUSAs are usually provided by or financed by a Federal agency, and only the Social Security Administration or the Department of Homeland Security (DHS) request and provide finances or personnel to USAOs to get their cases prosecuted, as usually USAOs refuse to prosecute immigration and Social Security related crimes. But Pham’s experience as a SAUSA has been with gun and narcotics crimes, not immigration issues. It appears he was detailed from a local agency as a SASA from the Richmond Commonwealth Attorney’s Office.

The top lawyer at U.S. Immigration and Customs Enforcement (ICE), Tony Pham, was tapped on Tuesday to succeed Matthew Albence as the leader of the Department of Homeland Security (DHS) agency responsible for immigration detention, deportations and operations against transnational crime.

“As a seasoned leader with DHS, Tony will ensure ICE continues to safeguard our country’s borders from crime and illegal immigration,” an agency spokesperson said in a statement Tuesday.

Pham will depart his previous post as ICE’s principal legal advisor and become the senior official performing the duties of the director, the same position held by Albence, who announced his departure late last month. After being tapped to lead ICE in the spring of 2019, at the peak of a surge in border crossings by Central American families and children, Albence was never nominated to be the permanent, Senate-confirmed director of the agency.

Pham, a Vietnamese immigrant who resettled in the U.S. as a refugee with his family after the fall of Saigon in 1975, will lead an agency that has become a focal point of the nation’s polarizing debate on immigration.

While a Vietnamese refugee who left in the first wave of refugees in 1975 is least likely to be anti-white or support mass immigration of leftists, and there is a good chance he is a reactionary on most issues, there is a problem. He was Principal Legal Advisor, the head of ICE’s Office of the Principal Legal Advisor (OPLA). The OPLA is a notorious center of resistance to increased immigration enforcement. OPLA attorneys in the field are more concerned about declining and dropping cases against aliens in the immigration court system.

OPLA attorneys have also overreached—in some ICE offices, such as the San Francisco Field Office, they have been throttling arrests of illegal aliens, requiring all arrests by ICE SVU agents be pre-approved.

This was never the case in the legacy INS days: Agents and officers would make arrests, have the arrests rubber stamped by their managers, and just give them to the Office of Counsel to prosecute. Now the OPLA is vetoing and throttling enforcement. See my work here on the Deep State saboteurs at OPLA: ICE Attorneys Continue To Sabotage Enforcement, by Federale, VDare, January 17, 2020, The ICE “Office of the Principal Legal Advisor”—#DeepState Saboteurs, by Federale, VDare, December 6, 2017, and ICE SVU Saboteurs Withdraw Trump-Ordered Fines For Illegals Who Fail To Depart, by Federale, VDare, October 26, 2019.

In the short time that Pham has been the Principal Legal Advisor, has he done anything to stop the sabotage by the Resistance in the OPLA? Since Pham had no experience in immigration legal issues prior to his appointment, it is unlikely he has been able to reform OPLA; it appears that he is uniquely unqualified to be either the Principal Legal Advisor or the Director of ICE. He has never made an immigration arrest, much less prosecuted a deportation case.

Strangely, Jessica Vaughn of the Center for Immigration Studies (CIS) thinks this is a great nomination.

I don’t know why. Vaughn and CIS are dependable, perhaps she can explain. This all the more disturbing since ICE SVU, also known as Homeland Security Investigations (HSI), is now headed by a Customs puke, Derek Benner, with no experience in immigration enforcement.