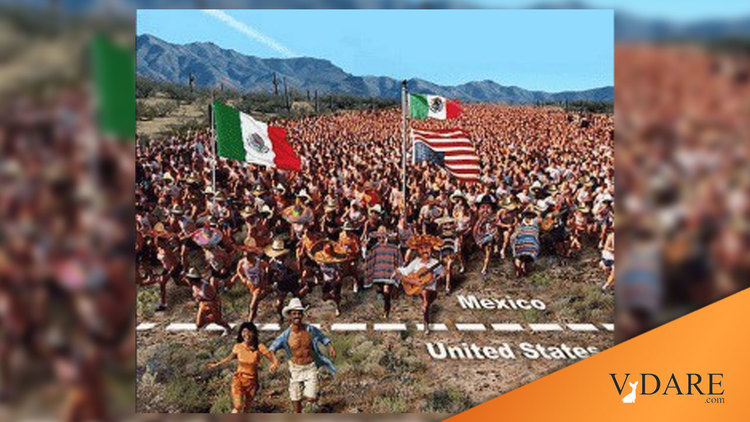 The Border Patrol revealed in a report released Wednesday that the number of migrants apprehended at the border in the month of January reached nearly 78,000, up from 36,679 in January 2020.

Single adult Mexican citizens accounted for more than 37,000 CBP encounters, a 119 percent increase from this time last year, according to the agency.

This should in no way be a surprise. Everyone wants to come to America as I noted in 2017: 7% Of Ghana Has Applied For Visas To Immigrate Here. That's Just For Starters.

But much more importantly it should not be a surprise because of the radical shift within the Democratic Party on immigration which occurred in President Obama’s second term:  Pelosi Stated Obamacrat Immigration Policy: Not Open Borders: NO Borders. GOP/AdelZuck response: Zzzzz. I quoted from Breitbart.

"This is a community with a border going through it. And this crisis—that some call a 'crisis'—we have to view as an opportunity," Pelosi told reporters at a press conference.”

A community with a border running through it?  Pelosi’s speech writers apparently equate America with the States of post-colonial Africa, where this is a genuine issue.

To everyone who followed the immigration issue, it was axiomatic that if the Democrats gained the White House, immigration law enforcement would stop and the border would be opened. And this is precisely what has happened.

SO WHY WAS NOT THIS PROMINENTLY FEATURED IN TRUMP’S CAMPAIGN?

In his magisterial discussion of President Trump’s record A Long Farewell To Donald Trump, Immigration Patriot. And Thanks, Peter Brimelow asked

Why, for that matter, is he not campaigning on immigration now—for example, pointing out that the Democrats will junk his temporary immigration moratorium as soon as they can?

Michael Barone noted this in his column too—“Astonishingly, Trump has failed to emphasize his two signature 2016 issues: immigration and trade.”

Part of the reason: Trump’s re-election campaign, like his Administration, seems mostly to be run by conventional GOP Beltway apparatchiks, who have never given the immigration issue any thought at all.

And it has deep roots: Peter Brimelow On Georgia: "This Is McConnell's Disaster And He Needs To Resign Immediately."

But the fact it is the Republican Congressional Leadership which wrecked Trump’s immigration policies by not giving them legislative substance.

Of course, they could call this judgment into question by vigorously protesting Biden’s treason.

I am not holding my breath.