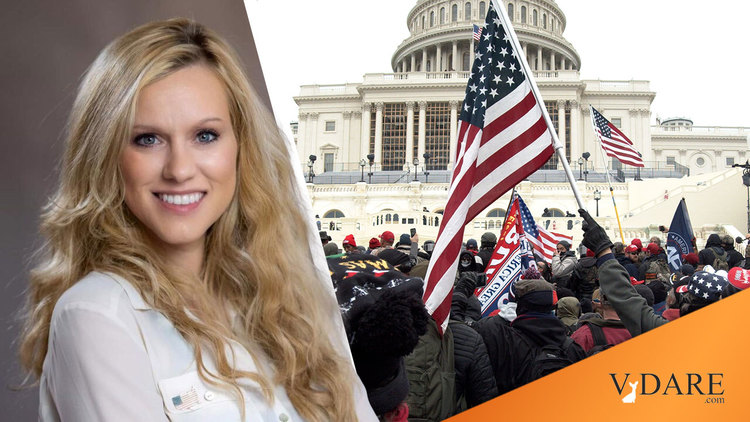 From: Lauren Witzke [Email her]

I can affirm, as your video documents, that there was police brutality at the January 6th patriot rally at the U.S. Capitol.

By the time I got to the Capitol, people had already made their way up to the steps. Trump supporters were waving flags and trying to talk to the Capitol Police. Every rally-goer at that point was extremely peaceful. I then saw Capitol Police Officers with rifles appear on the balcony looking down on us. Almost immediately, the Capitol Police on the ground started throwing flash grenades into the crowds, teargassing us all.

I moved about 40 feet away from the steps, and just stood there, yet the tear gas and flash grenades continued. After being flash bombed and tear-gassed for the third time, I looked down beside me to see that a middle-aged man—Kevin Greeson—on the ground, blue in the face.

My friend Kimberley immediately began CPR and continued until her lips were bleeding. But she couldn’t get him breathing again. Men were yelling “Help we need an EMT, get this man an ambulance,” etc. We begged the Capitol police officers for help. But they ignored us, and continued macing old men who got anywhere near them.

Trump supporters were able to make a makeshift gurney out of the fencing and carry him out of there. Capitol Police continued to flash bomb and tear gas us, macing in the face anyone who came near them.

We were never violent, it was always them—following Nancy Pelosi and Chuck Schumer’s orders and covered up by the media.

Kevin Greeson died at their hands.