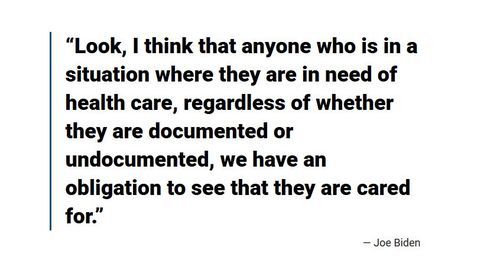 "Moderate" Joe Biden: US Has "Obligation" To Provide Health Care For Illegals

If that's the case, why even bother having a military? Why pretend we have a country at all?

Leading 2020 presidential candidate Joe Biden said this week that the U.S. must provide health care to everyone in the country, “regardless of whether they are documented or undocumented.”

Biden made the remarks while campaigning in Los Angeles, as he fielded questions from the media.

“Look, I think that anyone who is in a situation where they are in need of health care, regardless of whether they are documented or undocumented, we have an obligation to see that they are cared for,” Biden said in response to whether illegal immigrants “should be entitled to federal benefits like Medicare, Medicaid.”

[Biden backs health care for illegal immigrants, says 'we have an obligation' to provide it, by Lukas Mikelionis, Fox News, May 10, 2019]

Already, federal entitlement programs are heading for a crunch. It's standard Conservatism Inc. rhetoric and I almost feel embarassed about saying it, but that doesn't mean it's not true. The federal government is simply not going to be able to meet its fiscal demands in the coming decades.

The Congressional Budget Office (CBO) projects the federal government will begin running annual deficits exceeding $1 trillion in 2020 and run a cumulative 10-year deficit of $12.4 trillion from 2019 to 2028. These large deficits are on the order of those racked up immediately after the Great Recession, but they are now in the offing when the economy is strong, employment is high, inflation and interest rates are low, and the business cycle is likely near its peak. If we faced another recession today, we would be starting from a baseline of extremely high deficits and growing them further...

Of course, the Beltway Right simply wants to cut or restructure these programs. But that's a shallow way of thinking about the problem. Doing anything about it politically is already impossible in a country with universal suffrage, when advocating cutbacks is a sure road to electoral ruin. If anything, entitlements are likely to grow in the years ahead as America's burgeoning Third World population demands more entitlements and more racial preferences that will limit economic growth.

If these entitlements are promised to the entire world, it will encourage an even larger border rush than what we are experiencing now. It will also ensure that today's middle-aged Americans will never see a dime from the social programs they are subsidizing today. But what does Joe Biden care? He got his; by the time the crunch hits, he'll be long gone.