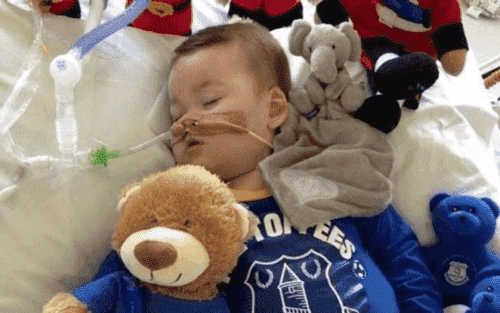 Michelle Malkin: Alfie and Haleigh and Charlie and Jahi—Medicide Can Happen In America, Too

When British hospital officials tried to pull the plug on 23-month-old toddler Alfie Evans (above) on Monday night in arrogant defiance of his parents' wishes, many Americans took to Twitter to count their blessings that they live in a country that would not allow such tyranny.

"Stories like Alfie Evans make me realize how grateful I am to live in America where freedom still exists," one young social media user wrote.

"Folks, is this what we want for America? Parents rendered helpless before the gods of socialized medicine?" retired Army Lt. Col. Allen West asked.

Alfie's plight comes less than a year after another British baby boy with a rare genetic condition, Charlie Gard, was taken off life support after his parents lost a similar battle with judges and medical officials.

"WAKE UP AMERICA! We cannot let this happen in the U.S.," social media user Dian tweeted.

But it has happened—and continues to happen—in America. How quickly the public forgets.

In 2005, medical experts and child welfare bureaucrats in the state of Massachusetts deemed 11-year-old Haleigh Poutre "virtually brain-dead," in a "persistent vegetative state," and not worth saving after she suffered such brutal beatings and sexual abuse by her stepfather that she was left in a coma. Doctors at Baystate Medical Center in Springfield and extermination agents at the Massachusetts Department of Social Services won a court order to remove Haleigh's ventilator and feeding tube. They collaborated on a "treatment" schedule to starve her of nourishment and oxygen until she succumbed to "death with dignity."

Haleigh and higher powers had other plans.

As state officials prepared to remove Haleigh's life support, the supposedly impossible happened: She emerged from the vegetative state that all the smarty-pants in lab coats had concluded was "irreversible." She began breathing on her own and picked up toys on command.

Like Alfie, Haleigh had an army of grass-roots pro-family and pro-life supporters who helped pressure the state-sanctioned murderers and bungling bureaucrats to back down. Fast forward to 2018. At 24, Haleigh lives with adoptive, loving parents. She is confined to a wheelchair, but attends school and occupational therapy. She laughs, she smiles, she lives.

Among Haleigh's prominent guardian angels: the Terri Schiavo Life & Hope Network, founded by Schiavo's brother, Bobby Schindler, after a Florida judge ordered brain-injured Terri to be deprived of water and food, leading to her death by dehydration after 13 days in 2005. As Schindler noted after Haleigh's life was saved:

"(T)his is just one incident that made headline news. Indeed, most of the general public is completely unaware of how much these types of decisions are made every day and how our medical rights have been eroded by laws that have been changed to make it easier to deliberately kill our medically vulnerable."

Back in Britain, Alfie defied the medical professionals and survived the night off the ventilator as his parents begged court officials to take him to Rome. Benefactors have offered to pay for transportation and medical care; Italy granted Alfie citizenship.

As Alfie's life hangs in the balance, I think of another child written off by the experts here in the U.S.: Jahi McMath, whom medical experts declared "brain dead" after a routine tonsillectomy gone wrong in 2013. Children's Hospital Oakland pushed to have all life-sustaining medical treatment terminated; the professionals predicted quick deterioration.

But Jahi's mother (a professional nurse), Latasha "Nailah" Winkfield, refused to give up on her child. California declared Jahi legally brain dead, so with the Schiavo Foundation's help, Winkfield moved with her daughter to a long-term care facility in New Jersey.

Medical ethics writer Wesley Smith visited Jahi last fall and reported: "At the time of the tragedy, I believed ... that Jahi was, indeed, dead. But I now have strong doubts. It's nearly four years later, and Jahi's body still has not broken down. Her skin remains smooth. There are no foul odors in her room as would be expected when a brain-dead person's body deteriorates. She has experienced no visible bodily decline... Disabled is not dead."

So, where are all the left's human rights champions when you need them? Once again, there have been no rallying cries from Hollywood celebrities, no tweetstorms from the self-anointed guardians of children who embrace gun control in the name of saving lives and abortion in the name of choice.