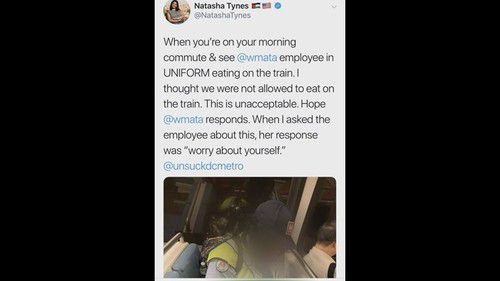 From WUSA9, the CBS station in Washington D.C.:

Eating while black, and employed by Metro – woman sparks outrage after tweeting photo of WMATA employee eating on train

A Twitter user called out a black Metro employee for eating on the Red Line. The one with the complaint, not the employee, received the backlash.

WASHINGTON – The 9 a.m. Friday tweet began, “When you’re on your morning commute & see @wmata employee in UNIFORM eating on the train. I thought we were not allowed to eat on the train. This is unacceptable.”

Writer and World Bank employee Natasha Tynes wrote her statement of apparent frustration on Twitter after photographing a black Metro employee eating. The employee was in uniform at the time. She did not appear to be making a scene, or bothering other Red Line customers.

The tweet continued, “Hope @wmata responds. When I asked the employee about this, her response was, ‘worry about yourself.’ @unsuckdcmetro.” …

By the end of the day, Ms. Tynes’ book distribution company, Rare Bird Books, would sever all ties with her upcoming novel, and strongly urge her publisher to do the same.

People sympathetic towards the Metro employee accused Ms. Tynes of unfairly singling out a black woman, as multitudes of people have disobeyed the prohibition of eating on the Metro system. …

Natasha Tynes is said to be a Jordanian-American, but her very white sounding name obviated whatever intersectional Wokemon points she would have gotten from being named, say, Feyrouz al-Jihad.

Also, this Becky ought to be wearing a hijab to cover up her smooth hair if she wants to be higher up the progressive stack.

The ensuing response among the public continued to be nothing short of fierce and swift.

The outrage took aim squarely at Ms. Tynes, who by Friday afternoon deleted the initial tweet.

Social media accounts defending the Metro employee garnered thousands of retweets in a matter of hours, some pointing out Tynes’ subject matter of writing about minority-related issues.

“Natasha talks a lot about the challenges of writing as a minority woman, but took it upon herself to report a BW for *checks notes* eating,” wrote Twitter user Naima Cochrane. “Sis told her to ‘worry about yourself,’ and the ‘I need to speak to a manager’ jumped out.” …

“Black women face a constant barrage of this kind of inappropriate behavior directed toward them and a constant policing of their bodies,” the statement read.

A lot of what is going on lately are primeval turf wars. D.C. has a lot of valuable turf, both real estate and institutional, such as jobs working for Metro, that blacks control through weight of numbers and threat of violence. Most D.C. blacks believe in a 50 year old conspiracy theory called The Plan to squeeze blacks out of their prime turf, because, well, it would be stupid of non-blacks not to have The Plan.

But another aspect of the current madness is this: what Social Media has reminded us is that most people don’t actually care all that much about the large abstract entities that various ideologies tell them to hate like the bourgeoisie. Instead, they get irked at other individuals they encounter. But, the dominant ideology of the 2010s, wokeness, encourages blacks to hate whites, so we constantly get these kind of petty stories about individual blacks feeling entitled and indeed encouraged to get mad at individual whites.

So we have this vast ideological movement that basically boils down to telling people they can punch down at any individual who pisses them off who is below them on the Intersectional Totem Pole because that’s Punching Up.

Basically, we’ve liberated everybody except Cishet White Males to indulge their most petty private resentments on the grounds that they are Fighting the Good Fight against the Nazis.