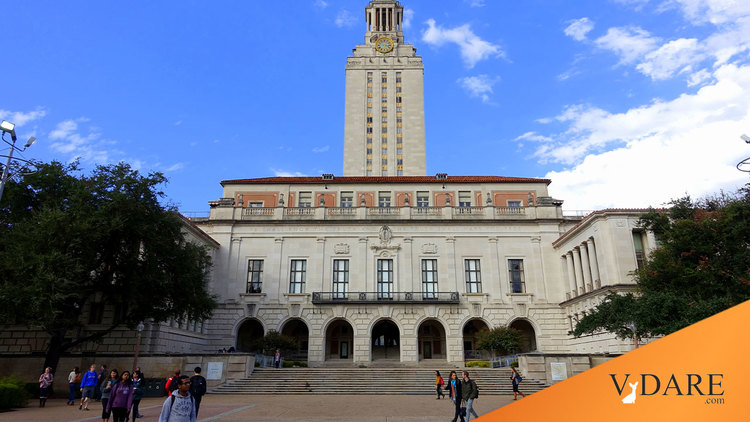 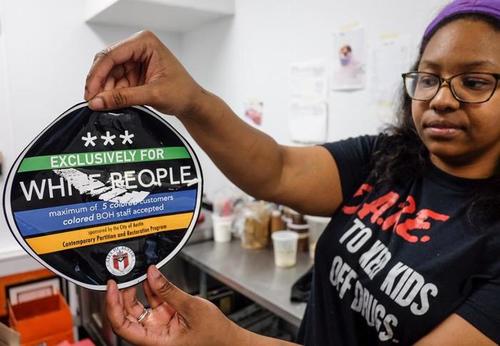 Via Ann Althouse's blog, I see that in Austin, Texas, a largely white city, partly because it's expensive to live in, has been experiencing a campaign of "bias incidents" in the form of window stickers.

Employees at several Austin businesses have found stickers saying "exclusively for white people" placed on their windows, sparking an investigation into their origin and condemnation from the mayor.

Mayor Steve Adler said the stickers discovered Wednesday morning were "an appalling and offensive display of ignorance in our city."

The stickers also say "Maximum of 5 colored customers / colored BOH staff accepted," apparently referring to the "back of house" operations at a restaurant. They featured a city of Austin logo and claimed to be "sponsored by the City of Austin Contemporary Partition and Restoration Program," though no such program exists. The city has said the use of its logo was unauthorized.

Austin is one of the fastest-growing cities in the U.S. and is confronting increasing questions about economic and racial segregation as real estate prices skyrocket around its urban core.

Raul Alvarez, board president for the East Austin Conservancy, said the stickers are likely in response to gentrification in the area on Austin's east side.

When Alvarez says they're a "response to gentrification", he means they were covertly put up by either non-whites or by white Social Justice Warriors.

The AP doesn't quite seem to get it that these stickers are being placed by people who are racist against whites—which is what hatred of gentrification is.

No one at Althouse's blog was fooled.

Not reported in this story was that the local NAACP sponsored state rep, Dawna Dukes, took these stickers at face value and really, truly thought she had her Ferguson/Sharpton moment. She went nuts on the social medias and was the last person to grudgingly admit that maybe it wasn't real.

The blog Legal Insurrection has details of Dawnna Dukes (that's how she spells it) being fooled—she actually called for a boycott of a store that had been stickered. 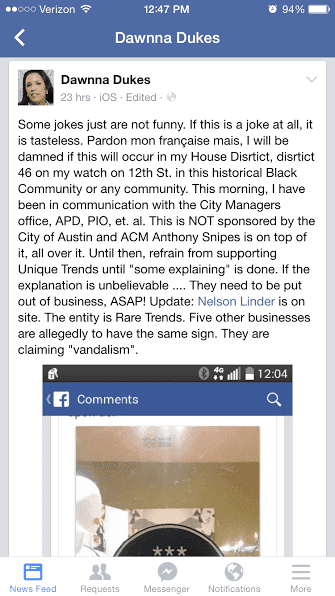 However, the head of the local NAACP wasn't fooled. According to the AP

"Don't put signs like that on people's doors because you want to bring attention to your plight," he said.

First of all, the default assumption should be that these things are fake.

Second, even if some actual white activists put up stickers like this, it is not something that the Mayor and people like that should bothering with.

But third, anti-gentrification campaigns are driven by racial bias against whites. Under serious Federal laws, seriously enforced (against whites) no one racial group owns a neighborhood, and they're not allowed to try and prevent members of other groups from moving in.

Those neighborhoods that are black these days, and are "tipping" white, weren't built by blacks. Blacks moved into them, and drove whites out with street crime. Improved law enforcement means whites are moving back, and if blacks don't like it, they can argue about with the Department of Justice and the EEOC. (Of course, the Holder/Lynch/Obama DOJ won't argue very hard.)