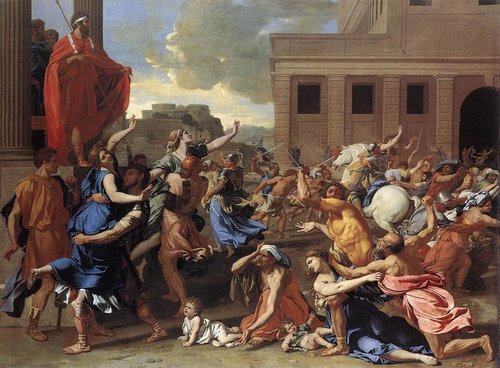 Atlantic: "The Secret of Rome's Success:" Invade the World, Enlist the World

In Houellebecq’s satire Submission, the suave Obama-like Muslim politician who becomes president of France frames his power grab as essentially conservative. For example, he eventually has Muslim North Africa and West Asia invited to join the E.U. in the name of reconstituting the Roman Empire. By the end of the book, Ben Abbes moves the E.U. headquarters from Brussels to Rome to be more central to Mare Nostrum, as he prepares to be elected President/Emperor of Neo-Roman Empire.

A new, much publicized history of Rome by Mary Beard, SPQR, sounds like an unwitting fleshing out of Houellebecq’s jest. The review in The Atlantic emphasizes how much we ought to learn from Rome’s grand strategy of Invade the World, Enlist the World.

The Secret of Rome’s Success

Mary Beard’s sweeping history is a new read of citizenship in the ancient empire.

SPQR: A History of Ancient Rome

A British  college student named Megan Beech recently published a poetry collection called When I Grow Up I Want to Be Mary Beard. Beech is not alone in her admiration for Beard, who was for a time the only female classics lecturer at Cambridge University and has since become the most prominent representative of a field once associated with dusty male privilege. …

Her magisterial new history of Rome, SPQR (which stands for Senatus Populusque Romanus, “The Senate and People of Rome”), is no exception. Every history of Rome has to tackle the question of how the Romans—a people who once lived in a ramshackle collection of wooden huts on a muddy river in the middle of Italy, surrounded by other groups that were at least as prosperous and cultured—created one of the largest empires in the ancient world, and among the most enduring empires in all of world history. …

How did the Romans do it?

One answer, which many Romans themselves favored, gives all the credit to their virtus, a word connoting both strength of character and masculinity. A related interpretation, popular among scholars a generation ago, portrays Rome as an exceptionally belligerent and imperialistic society that rose to power by bullying and massacring its neighbors. More recently, historians have proposed that the Roman empire’s growth was fueled by an evolving combination of hard and soft imperialism, and Beard builds on this current work. …

What was exceptional about this particular Italian tribe, as Beard explains with welcome clarity, was the way the Romans combined military prowess with a radically expansive notion of what it meant to be Roman—a notion that enabled them to spread the tendrils of Romanitas all over the Mediterranean world. Beard, who recently suffered some nasty sexist abuse for her sensible remarks in defense of immigrant workers in the United Kingdom, leaves the contemporary resonances mostly implicit.

… The Romans’ sense of their society as a hybrid one, Beard finds, is folded into their founding legends. Virgil’s Aeneid celebrates the Trojan hero who founded the city—a foreigner who, though he kills some of the native inhabitants, also unites the warring tribes. And without downplaying the horrific violence in the tale of Romulus and Remus and the rape of the Sabine women, Beard notes that the mass rape is portrayed not just as evidence of Roman aggression but as a way of creating a mixed society.

So Rotherham and Malmo, you’ve got that going for you.

… Those who were, in Beard’s nicely cynical language, “forced, or welcomed, into some form of ‘alliance’?” had one essential obligation to their new friends, the Romans: to provide soldiers for the army.

Invade the world, enlist the world..

By the end of the fourth century B.C., Rome could call on half a million troops.

With all this talk about Chancellor Merkel’s genius move to solve Europe’s “demographic crisis,” it sure seems like modern pundits think it’s important that they command adequate supplies of Catapult Fodder

Its power was founded on people power.

Some readers may feel that Beard overemphasizes the gentler aspects of imperial rule. The newly subjugated were allies in name but not entirely in legal and political fact. But she is right to stress that the Romans pioneered a revolutionary understanding of citizenship, and in making the concept more central to the whole story of Rome than previous historians have, she highlights its truly distinctive facets. The idea that one could be a citizen, even a partial citizen, of a place where one did not live, and had perhaps never been, was virtually unprecedented. So was the idea that one could have a dual identity, as both Roman and Mantuan, Roman and Sicilian, or Roman and Oscan (when the Romans conquered the peninsula), or—later—Roman and Greek, Hispanic, Gallic, or British.

Most ancient societies assumed that being a citizen of a particular place meant not just living in that place, but also speaking the language and sharing in the common culture. Romans, by contrast, could be people who might well not even speak Latin. …

Beard’s title hints at her central interest in a familiar but compelling historical question: How did the various classes interact in the radically inclusive society that was Rome? … Beard’s well-balanced answers, in step with the most up-to-date scholarship, reflect a turn away from a top-down or “great man” approach. Reconciling the various social interests at stake in the Roman Republic, she argues, was ultimately impossible—beyond the capabilities of even the most impressive leader—given the new demands and opportunities of empire. She sums up the situation in a characteristically brilliant one-liner: “The empire created the emperors.”

Similarly, modern European elites have been looking forward to multiculturalism doing away with pesky checks on their power such as elections and freedom of speech.

Beard closes instead with the “culminating moment,” in A.D. 212, when the emperor Caracalla declared every free inhabitant of the empire a full Roman citizen, eroding the distinction between the Romans and the people they had conquered, colonized, and ruled. Beard is far too clear-minded to treat this moment as the end of social hierarchies. It was, rather, a moment when distinctions of class and wealth became increasingly important.