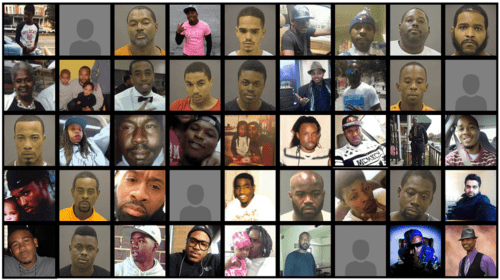 Thanks to #BlackLivesMatter, the war on police, and the aftermath of the Freddie Gray case, Baltimore is slowly transforming into an urban dystopia straight out of a Death Wish movie.

Baltimore isn't just back to 1990s-level homicide rates. It has surpassed them — and with a month and a half to go before the year's end.

Given the city's smaller population today, and the stack of killings that occurred in recent days, 2015 has officially become the deadliest year, per capita, in Baltimore history.

A man stabbed to death became the 300th homicide victim of 2015 on Saturday, the first time the city has reached that gruesome milestone since 1999. As of Tuesday evening, five more men had been shot dead, pushing the city's per capita homicide rate — based on the recent population estimate of 622,793 residents — to 48.97 per 100,000 residents. That breaks the record of 48.77 homicides per 100,000 residents set in 1993, when there were an estimated 723,802 city residents and the city hit its highest number of killings ever, with 353.

There have been 21 homicides in November alone with nearly half the month left — continuing a trend of more than a killing per day since the April death of Freddie Grayand the subsequent unrest.

[Per capita, Baltimore reaches its highest ever homicide rate, by Kevin Rector and Justin Fenton, The Baltimore Sun, November 17, 2015]

Homicide detectives are unable to solve cases because "getting information is difficult." The homicide closure rate was 50 percent in 2013, dropped to 45 percent in 2014, and is now down to just over 30 percent [Baltimore homicide unit overwhelmed with hundreds of cases, by Barry Simms, WBAL, November 19, 2015]

Not mentioned is the larger culture of "no snitching." Baltimore was the source of the infamous DVD produced in 2004 urging residents not to cooperate with police in drug cases. The son of the DVD's creator was murdered earlier this year [Man killed Saturday has ties to Baltimore 'Snop Snitching' DVD, by Jayne Miller, WBAL, June 1, 2015]

What's striking about this is how underreported this crime wave is. Black Lives Matter protesters keep pushing a Narrative about white people supposedly hunting down and killing them. The faux "intellectuals" the movement has produced are massively subsidized in return for making wild claims about the mortal danger evil white racists supposedly pose to "black bodies."

Yet day in, day out, blacks are merrily slaughtering each other in what was once the city of H.L. Mencken. And this development is barely deemed worthy of notice, let alone a protest movement by blacks themselves.

The truth is Black Lives Matter only when they can be used to extort money from whites. Otherwise, nobody seems to care. Including blacks themselves.