A recent Pew Hispanic report is being cited by the liberal press as illustrating “millions of people living in constant fear of removal” in the words of the Washington Post.

The Post further remarked that “half of the nation’s 11 million undocumented immigrants have lived here for at least 13 years,” in a state of extreme agitation according to media interpreters.

On the contrary, the multiple years of millions residing here illegally demonstrate how comfortable the foreigners are and how unnecessary an amnesty is. The illegals are getting along fine: millions hold stolen jobs, their kids of various legalities attend American schools for free and many collect taxpayer-funded benefits like food stamps.

Some aliens enter illegally in order to grab first-world healthcare. A 2006 Denver Post story admitted that hundreds of Mexican illegals in Colorado were there to mooch advanced medical care they couldn’t get at home. Mexican Ana Puente was brought illegally to the US for healthcare where she has gotten at least three liver transplants at a cost to California taxpayers of over a million dollars.

But lawbreakers mostly come for American jobs and more money (aka “a better life” in lib speak).

If illegals live in fear about being deported, they certainly don’t act like it. Illegals are busted for drunk driving all the time, so they can’t be too concerned about getting the hook. A Google search for Illegal Immigrant Drunk Driving Arrest found 3.7 million results. Case closed on the fear argument.

Illegal aliens are particularly secure in the United States under this administration, the minimal deportations of which have dwindled even more.

The Pew report being considered is titled As Growth Stalls, Unauthorized Immigrant Population Becomes More Settled. It has several interesting graphs, but the one below is pertinent to show the aliens’ comfort level. 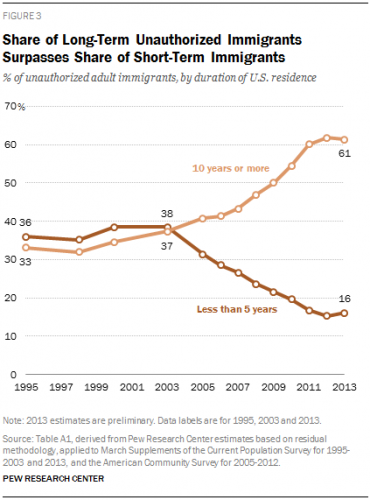 A 2011 Pew investigation showed a similar serenity and lack of need for amnesty, which I blogged as Pew Hispanic Report: 63 Percent of Illegals Have Resided in US 10 Years or More.

Illegals aren’t clamoring for citizenship or the vote — that noise is coming from the Democrat Party. An official work permit is the real amnesty, and illegals would like to have that very much, although clearly most are getting along fine without genuine “papers.” 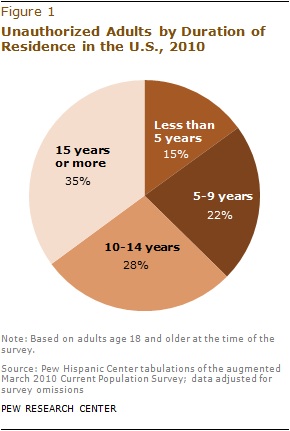 If millions of unlawful foreigners weren’t making money and successfully coping with American society, they would leave. Their length of stay shows amnesty is not needed, and would only reward and incentivize lawbreaking.

Illegal immigrants more likely to have lived in the U.S. for over a decade, Washington Post, September 3, 2014

The number of immigrants living illegally in the United States has leveled off in recent years, but those who remain are more likely to have far deeper ties to the country than they did a decade ago, according to a report released Wednesday.

The study from Pew Research Center found that half of the nation’s 11 million undocumented immigrants have lived here for at least 13 years and as many as 4 million have U.S.-born children.

The findings offer the most detailed portrait yet of the undocumented population and come as President Obama is weighing options about how he could use executive authority to remake his administration’s deportation policies amid mounting pressure from advocates to stem the breakup of immigrant families.

“These new estimates show that today’s unauthorized immigrants have lengthier ties to the U.S. than those in the past,” said Mark Hugo Lopez, Pew’s director of Hispanic research.

Immigration advocates have said that the administration, which has deported more than 2 million immigrants, has contributed to millions of people living in constant fear of removal from communities in which they’ve lived for many years. Opponents of relaxed immigration policies say unauthorized immigrants broke the law to get here and compete for jobs with American workers in a still-weak economy.

In their study, Pew researchers found that the number of undocumented immigrants, estimated at 11.3 million in 2013, has leveled off since the economic recession in 2008.

As the undocumented population has become more settled in the United States, more of them have had U.S.-born children, who are automatically citizens regardless of their parents’ status. Pew put the figure at 4 million undocumented parents, while a separate study from the Migration Policy Institute, also released Wednesday, estimated that number to be 3.5 million.

Those estimates could be important because Obama is reportedly considering proposals that would provide temporary deportation relief to the parents of U.S. citizens. The program, if implemented, would likely be modeled after his decision in 2012 to defer the deportations of young immigrants brought to the United States illegally as children.

More than 580,000 people have benefited from Deferred Action for Childhood Arrivals (DACA).

White House aides initially said Obama would announce his plans on new executive actions by the end of summer. But administration officials indicated late last week that the decision could be delayed until after the midterm elections in November because of concerns about the political implications for Democrats.

The Migration Policy Institute also found that 1,500 people living illegally in the United States are married to a U.S. citizen, a legal permanent resident or someone enrolled in DACA.