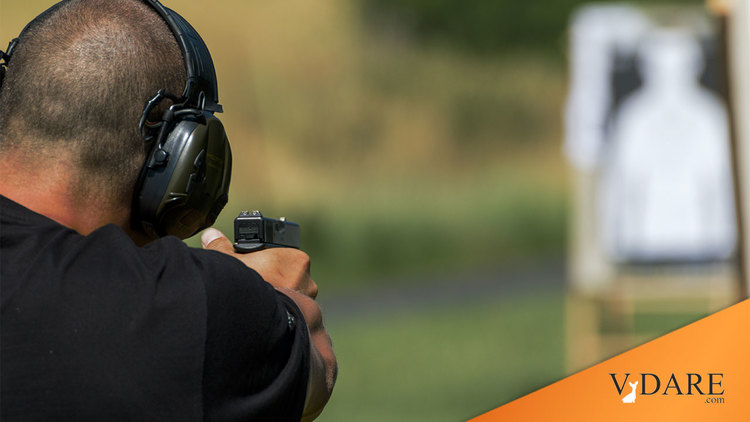 Are Cops Getting More Competent?

My impression from watching a lot of videos of cops that BLM complains about is that the quality of cops has gone up a lot over my lifetime. Here’s an objective metric: what percentage of bullets fired by cops strike the target vs. missing or hitting some bystander?

On the campaign trail last year, Joe Biden called for cops to shoot unarmed attackers with a knife only in the leg. On the cowboy TV shows that Joe watched in the 1950s, the hero was always shooting the gun out of the hand of the desperado, so in Joe’s mind, shooting an attacker in the leg ought to be easy.

But what has instead happened is not that cops have become worse shooters but that they’ve become better shots.

I don’t have hard data on this over the generations, but my impression is that cops are better shooters than they used to be. For example, I can recall that in TV cops shows in the 1960s, cops were portrayed as always firing one-handed. Then on Jack Webb’s “Adam-12” in 1970, which specialized in showing the latest techniques of the innovative LAPD, cops were shown always shooting two-handed, while the bad guys flailed about shooting one-handed until the superior accuracy of the police academy graduates put them down.

Consider Officer Nick “O’Time” Reardon’s putting all four of his shots into the body of Ma’K the Knife in a chaotic situation.

My guess is that in the 1960s, he might have hit the stabby teen once, hit her would-be victim the Girl in Pink once, missed completely once, and maybe broken a window on a house a block away.

Somebody might have some statistics on this. I don’t. But I am pretty good at noticing trends over my long lifetime.

I suspect that cops used to be less lethal to their targets per decision to open fire than they are now. If they fired four shots in the 1970s, they might get one bullet into a shoulder. Now, they are more likely to get several bullets into major organs like the heart.

This feeds into BLM complaints about cops shooting X number of times instead of just firing once.

My impression is that cops fired a lot in the past as well, but they were more likely to hit their targets only once or twice per fusillade. Now, cops are more competent, so, relative to the level of emergency medical care (which has vastly improved), they are more likely to kill their targets, which leads to increased complaints about police brutality.