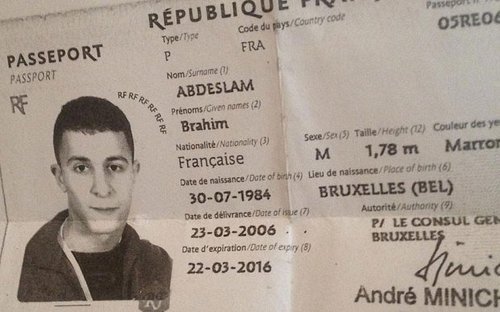 As we've seen in other cases, at least one of the bombers in the Paris terrorist attacks wasn't exactly devout.

Ibrahim, 31, blew himself up outside the Comptoir Voltaire Café on Friday, injuring three people and killing himself.

His former wife, Niama, has revealed that during their two year marriage, from 2006 to 2008, her husband smoked three or four joints a day and stayed at home watching DVDs or listening to music, according to the MailOnline.

[Paris bomber Ibrahim Abdeslam 'smoked cannabis every day' but 'had no gripe with the West,' Telegraph, November 17, 2015]

One of the most talking points right now is that Islamic terrorists aren't really Islamic or aren't "true Muslims." This variant of the "no true Scotsman" fallacy is used to lecture Westerners why expressing skepticism about the wisdom of importing millions of Muslims is practically a hate crime.

But there is a larger issue. What the West is importing isn't some kind of Saudi Arabia in its midst. It's importing a permanent underclass plagued by the same kind of social dysfunctions we see among many non-white minorities in the United States.

In Sweden for example, violent crime is "soaring."

Forty years ago, 421 rapes were reported to the police in Sweden annually. By 2010, according to a BBC report, police recorded the highest number of offences — about 63 per 100,000 inhabitants — of any force in Europe. That was the second highest in the world — surpassed only by Lesotho in southern Africa.

In August, a double murder in an Ikea store in Vasteras, a small city in central Sweden, sent shockwaves through the nation. The victims were ethnic Swedes, 55-year-old Carola Herlin and her 28-year-old son, Emil. Their attacker was a 36-year-old Eritrean migrant who confessed to the random killings, apparently carried out with knives seized from the store's kitchenware department.

[Sweden is seen as Europe's most liberal nation, but violent crime is soaring and the Far Right is on the march, by Sue Reid, Daily Mail, November 13, 2015]

How many of these criminals are Muslims? Probably a majority are nominal Muslims who may even go to the mosque once in a while. But truly devout? There's no way to be sure, but probably a small number. However, in terms of their catastrophic impact on Swedish society, they are almost as harmful as an ISIS sympathizer who spends his days brooding on the injustices of the Crusader West.

What Europe is importing is a permanent underclass. Islam is a complicating factor because, like in American prisons, it can provide an ideological justification explaining the failure of this underclass as the fault of "discrimination" and "religious oppression." Occasionally, some degenerate will turn his life around by becoming a more devout Muslim, like Ibrahim Abdeslam did.  And as the denizens of this underclass are now sufficiently numerous they cannot be tracked, the minority of terrorists now have the "sea" they can swim in, as Mao famously said of guerrillas.

For the members of this underclass, we have to hope they remain parasites, instead of becoming murderers. But they never actually provide a benefit to Europe. Assume Ibrahim Abdeslam had never become a terrorist. Instead, pretend he stayed at home doing drugs all day and mooching off Europeans like he did before. Would the Republic still have benefited in any way from his presence?

More to the point, why is it so important Europeans import millions more parasites just like him?