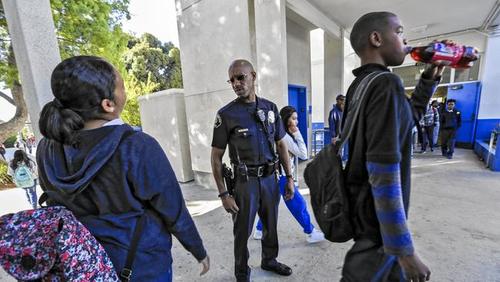 Now we know the very first target of the Obama Administration’s discrimination investigations of local school districts: This obvious discriminator against Spanish-speaking students is the Los Angeles Unified School District (Ramon Cortines, Superintendent). It must be all those white racist gangs in lily-white LA.

Now from the L.A. Times:

In a South Los Angeles classroom, a boy hassles a girl. The teacher moves him to the back of the room, where he scowls, makes a paper airplane and repeatedly throws it against the wall. Two other boys wander around the class and then nearly come to blows.

“Don’t you talk about my sister,” one says to the other. The teacher steps between them.

When she tries to regain order, another boy tells her: “Screw you.”

It’s another day of disruption on this campus in the Los Angeles Unified School District, which has been nationally hailed by the White House and others for its leadership in promoting more progressive school-discipline policies. The nation’s second-largest school system was the first in California to ban suspensions for defiance and announced plans to roll out an alternative known as restorative justice, which seeks to resolve conflicts through talking circles and other methods to build trust. …

The shift has brought dramatic changes: Suspensions districtwide plummeted to 0.55% last school year compared with 8% in 2007-08, and days lost to suspension also plunged, to 5,024 from 75,000 during that same period, according to the most recent data.

But many teachers say their classrooms are reeling from unruly students who are escaping consequences for their actions.

They blame the district for failing to provide the staff and training needed to effectively shift to the new approach — and their complaints are backed up by L.A. schools Supt. Ramon Cortines. He said the new discipline policies, which were pushed through by the Board of Education and former Supt. John Deasy and which he supports, were poorly executed. He compared the implementation to the flawed effort to equip students and teachers with Apple tablets.

“I will compare it to the iPad,” Cortines said. “You cannot piecemeal this kind of thing and think it is going to have the impact that it should have. Don’t make a political statement and then don’t have the wherewithal to back it up.”