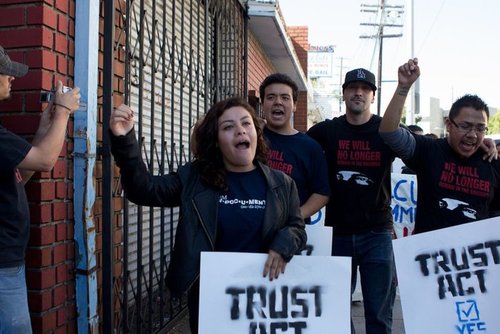 Above, Hispanics demonstrate in favor of the TRUST Act, signed by Jerry Brown, which prevents immigration holds in California. 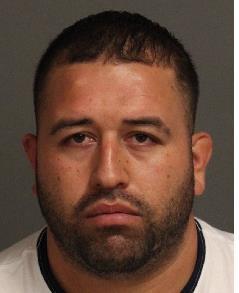 A violent illegal alien who was released from jail for a charge of bone-breaking assault did not show up for his court date. Whatever did authorities have in mind when they allowed bail for a man who was definitely a flight risk?

That’s a rhetorical question in California, where the most dangerous foreigners like to reside because no other state is so criminal friendly.

The alien in question is Francisco Chavez (pictured), who was arrested a couple weeks ago for beating a toddler nearly to death, yet he was allowed bail. He has a local record too, so San Luis Obispo authorities had no excuse of ignorance about him:

. . . Chavez similarly has a criminal history in San Luis Obispo dating back to 2006, when he was convicted of felony assault and served about 180 days in County Jail. Court records show he had been arrested at least four other times on suspicion of various offenses, including a 2011 felony conviction for possessing a controlled substance for sale.

According to ICE, Chavez was previously deported in February 2014 following a San Luis Obispo County conviction for drunken driving.

Apparently the Mexican could have been kept in jail if he had been charged with a worse crime. Does this screw-up reveal Chicago-level corruption or California stupidity? Chavez is likely back in Mexico now.

It’s not like the citizens have a right to expect some semblance of public safety for all the taxes we pay.

An illegal immigrant whom the San Luis Obispo County Sheriff’s Office recently let out of jail did not appear Thursday at his first court appearance for the alleged near-fatal beating of a 2-year-old girl.

Francisco Chavez, 27, is accused of nearly beating to death the young daughter of his live-in girlfriend. The two-year-old reportedly suffered a broken leg, two broken arms, a compressed spine, bruises and a urinary tract infection. She was in the hospital with a 107-degree fever days following the beating.

On Thursday, after Chavez failed to appear, Judge Dodie Harman ordered a warrant for his arrest with bail set at $600,000.

Chavez is a Mexican national with an extensive criminal history that includes convictions for drug trafficking and assault with a deadly weapon. He was deported from the United States last year following a drunk driving conviction in San Luis Obispo County.

But, on the following day, Chavez posted $100,000 bail, the required amount for a charge of willful harm or injury to a child likely to produce great bodily injury. The sheriff’s office then released him from jail.

Following Chavez’s release, Sheriff Ian Parkinson said the law prohibits sheriffs from holding inmates on ICE detainers unless federal authorities issue warrants for them. Parkinson appeared on a Fox News broadcast last week in which the interviewer reported that Parkinson said he would have gotten sued by the ACLU had he honored the ICE detainer for Chavez.

Nonetheless, Chavez’s bail could have been set for $1 million had he been charged with a similar, yet more serious crime. The bail schedule is $1 million for a charge of assault of child under the age of 8 with force likely to cause great bodily injury.

Prosecutors have now charged Chavez with two counts of corporal punishment or injury of a child and five counts of willful harm or injury to a child likely to produce great bodily injury.

A Fox News article accompanying the television interview states Parkinson said he suspects Chavez may have already fled the country.

Ramirez allegedly broke into Pharis’s home and attacked her on July 25. Ramirez was released from custody just five days prior to the alleged murder.