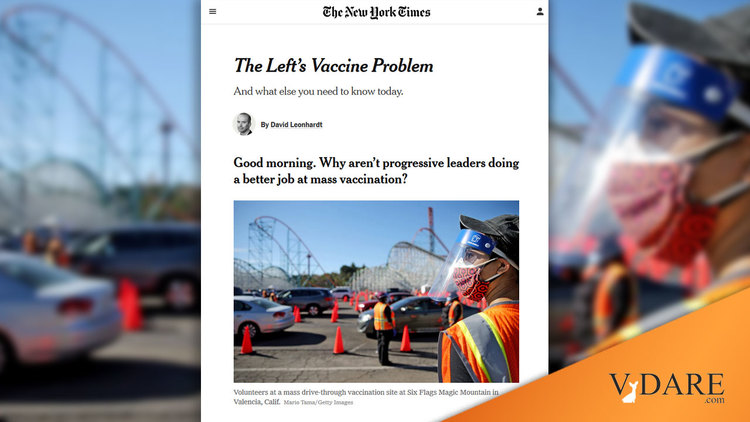 The Left’s Vaccine Problem: Prioritizing "Not Being Racist" Over Saving Lives

… Progressive leaders in much of the world are now struggling to distribute coronavirus vaccines quickly and efficiently:

Europe’s vaccination rollout “has descended into chaos,” as Sylvie Kauffmann of Le Monde, the French newspaper, has written. One of the worst performers is the Netherlands, which has given a shot to less than 2 percent of residents.

Within the U.S., many Democratic states — like California, Illinois, Minnesota, New Jersey, New York and tiny Rhode Island — are below the national average. “The parts of the country that pride themselves on taking Covid seriously and believing in government are not covering themselves in glory,” The Times’s Ezra Klein has written.

Alaska and West Virginia have the two highest vaccination rates among U.S. states, with Oklahoma and the Dakotas also above average. Globally, Israel and the United Arab Emirates have the highest rates. Britain — run by Boris Johnson, a populist Conservative — has vaccinated more than 15 percent of residents.

Is Boris really a “populist?”

…Why? A common problem seems to be a focus on process rather than on getting shots into arms. Some progressive leaders are effectively sacrificing efficiency for what they consider to be equity.…

Some blue states have also created intricate rules about who qualifies for a vaccine and then made a big effort to keep anybody else from getting a shot. These complicated rules have slowed vaccination in both California and New York. …

“Across New York State,” my colleague Dana Rubinstein has written, medical providers have had “to throw out precious vaccine doses because of difficulties finding patients who matched precisely with the state’s strict vaccination guidelines — and the steep penalties they would face had they made a mistake.”

By the way, Scott Alexander of SlateStarCodex is back with a Substack subscription blog at https://astralcodexten.substack.com/ .

Scott says the best blogger on Covid is some guy named Zvi Mowshowitz, who, not surprisingly, turns out to be pretty good.

Zvi cites an MIT Technology Review article about how terrible is the CDC’s software for making vaccination reservations that they paid Deloitte $44 million for:

“It won’t work on Internet Explorer; it only works in Chrome. The ‘Next’ button is all the way down and to the right, so if you’re on a cell phone, you literally can’t see it,” says Rowe. “In the first round, people using VAMS mostly had advanced degrees. If you’re 75 and someone asks you to log into VAMS, there is zero way it’ll happen without help.” …

Elderly people aren’t the only ones who will struggle if vaccination requires online sign-up. Language barriers will become a significant problem, especially for non-native English speakers doing high-risk essential work. People in rural or poor urban areas often have limited access to the internet in the first place, a problem disproportionately affecting the same Black and Latino communities that have suffered the worst traumas of the pandemic.

“There are some real equity concerns,” says Stone. “What happens when you go to a city and 20% of the population can’t get the notices?”

As usual, when something fails a lot of people, that is cited as an ‘equity’ concern rather than a ‘failing lots of people’ concern.

Not Being Racist is America’s highest priority in 2021, far beyond Getting The Job Done.