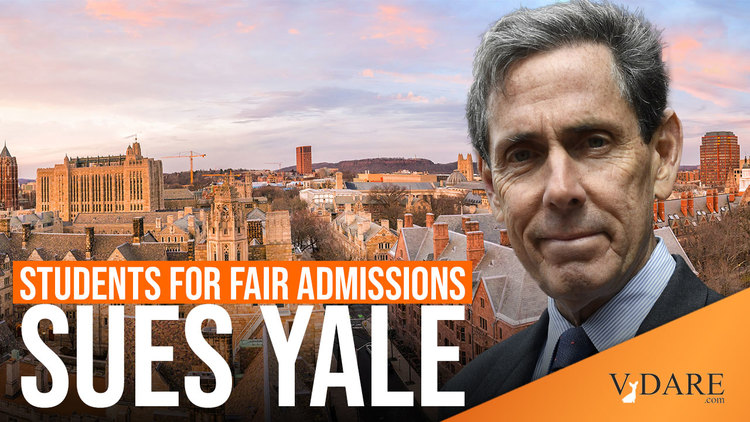 While at Princeton, the Trump Administration may have been all bark and no bite, the new administration shows more determination. This week we heard that Joe Biden's Justice Department has dropped a Trump administration lawsuit filed in October last year against Yale University.

The lawsuit followed an investigation that was carried out, a two-year investigation into Yale's discriminating against White and Asian students in admissions while favoring Blacks and Hispanics.

Yale of course does practice race favoritism in admissions, as do most other elite colleges, in flagrant violation of the 1964 Civil Rights Act. Ron Unz crunched the numbers on that back in 2012.

There is a glimmer of hope that Yale might end up paying for its race favoritism, though. Eric Lendrum over at American Greatness has a report on this, from which, quote:

Despite the formal setback, Yale's legal troubles may not be over yet. A student activist group, Students for Fair Admissions, says it will re-file a similar suit on its own. The president of SFA, Edward Blum, said in a statement that while  "it is disappointing that the Department of Justice withdrew from this important lawsuit … it is important that this lawsuit continues to be vigorously litigated through the courts during the coming months and years if necessary."[Biden DOJ Drops Yale Discrimination Lawsuit, by Eric Lendrum February 4, 2021]

I still favor my Henry the Eighth "dissolution of the monasteries" solution for the university problem … but I'll take what I can get.