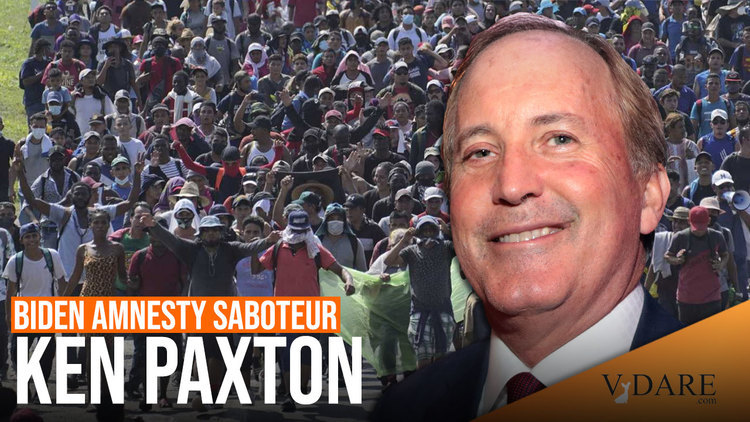 Another Ken Paxton Victory Over Biden In Texas

Ken Paxton, Attorney General for the State of Texas, has another victory over the Biden Regime Administrative Amnesty, this time over the amnesty for criminal aliens.

Some time ago, the Biden Regime and their Deep State operative Tae Johnson instituted an amnesty for criminal aliens, releasing criminal aliens from custody during removal proceedings and dropping or not initiating deportation proceedings against criminal aliens. Ken Paxton and others filed a lawsuit against the criminal alien amnesty. Yesterday, Drew Tipton, United States District Court Judge, Southern District of Texas, issued his opinion against the the Biden Regime Criminal Alien Amnesty, finding Tae Johnson’s amnesty memorandum to U.S. Immigration and Customs Enforcement (ICE) arbitrary, capricious, and unlawful, ordering it to be set aside.

BREAKING: I just dealt Biden another massive defeat in fed court. He tried to throw out immigration law, saying DHS didn’t have to detain criminal illegals. The court now says he must. I will always hold the line with the Dems and the rule of law. https://t.co/EfHXWBidAB

This is a significant victory over one of the aspects of the Biden Regime Administrative Amnesty and Paxton is the leader America needs on illegal immigration. Sadly, Governor Greg Abbott of Texas is talking the talk on illegal immigration, but not walking the walk. Previously Abbott claimed he would deploy sufficient forces from State of Texas, including State Troopers, Texas Rangers, and the Texas militia to physically prevent illegal aliens from entering as former Governor Rick Perry did when it mattered.

Even worse, Abbott’s effort to embarrass Biden by transporting illegal aliens to Washington, D.C  was done in cooperation with the illegal aliens who wanted to go there. Abbott is failing completely, while Paxton goes from success to success, and should be the next DHS Secretary.

Governor Ron DeSantis of Florida has seen Abbott’s failures, and spoken out about those failures, specifically the failure of Abbott to order what DeSantis inaccurately calls deportation, but more accurately is push-back.

Push-back is the law enforcement strategy to stop an unlawful entry by an alien by physically preventing entry or using force or the threat of force to cause the alien to retreat across the border back into Mexico.

Florida Gov. Ron DeSantis is calling out Texas Gov. Greg Abbott for refusing to send illegal aliens back to Mexico, in the wake of heightened illegal crossings on Texas’ southern border.

“They let them come across and then you give them to the feds, and the feds just release them anyways,” DeSantis said, according to a report from Florida Politics. “What they need to do, Texas, is Texas should just send them back across the border.”

“Who cares what the feds are saying? They’re not doing their job,” DeSantis added. “Or not let them come across the border to begin with, because they go right across the river. They just walk right across. No one’s stopping [them]. Some pushback, I think, would be good. And I would send people to help with that.”

Abbott instituted Operation Lone Star last year as a means of combating the out-of-control illegal border crossings. However, OLS has been widely criticized as “political theater” mired with political, legal, and logistical problems.

Abbott’s recent idea for border security included busing migrants (on their own volition) to Washington, D.C., and halting all commercial traffic at the border for additional inspections. Critics say these plans have all failed to address the real problem: illegal border-crossers who are subsequently released into the U.S. rather than deported.

Now, the question is can a State take an alien into custody, then remove that alien? Clearly push-back is legal, preventing entry or physically forcing an alien to retreat back across the border is completely legal. It is not proscribed by law, therefore it can be done. But can a State go the next step by taking an alien into custody and remove that alien? Given the Supreme Court decision in Arizona v. U.S., which basically established Federal supremacy on immigration enforcement, likely not, though similarly, there is no statute preventing a State from deporting an alien. Push-back has more legal standing because it is preventing an alien from entering or forcing an alien to take action on their own. Actually detaining an alien and then removing that alien is quite different.

Since that is not prohibited by law, one can reason that the States are exercising their inherent authority to prevent an invasion by millions of, well, invaders. Just because they are unarmed, does not make it an invasion. States are authorized by the Constitution to repel invaders.

No State shall, without the Consent of Congress, lay any Duty of Tonnage, keep Troops, or Ships of War in time of Peace, enter into any Agreement or Compact with another State, or with a foreign Power, or engage in War, unless actually invaded, or in such imminent Danger as will not admit of delay.

But, the statutes governing aliens and their deportation assigns authority to the Attorney General of the United States and the Secretary of the Department of Homeland Security. However, since there is no record of deportation, once could argue that the alien has not been deported, just physically removed and that alien has no legal recourse, but also no record of being deported. Of course, the alien is still subject to criminal prosecution for unlawful entry, but has no record of deportation, which in the future would allow the alien to remain eligible for certain immigration benefits.

Given that illegal aliens are acting in concert in an effective invasion and entering as part of an illegal conspiracy between the Biden Regime and international criminal organizations, the States are acting lawfully to prevent an invasion. But I don’t see a majority on the Supreme Court supporting Texas or any other State in taking this action. John Roberts is a squish, but would at least one other Justice from the right side also fold on this issue? Likely.

However, a new Congress can change that by authorizing States to push back illegal aliens and remove illegal aliens. In any event, I believe that States can act under Clause Three of the Constitution by push-back and physical removal. This does however open up the question of whether States can do this to other illegal aliens deep in the interior and can States put illegal aliens on planes back to their country of nationality?

Things should be getting fun as the U.S. government collapses under Biden’s senility and the upcoming conflict between Congress and his flailing and failing administration. Admittedly I was a skeptic on the issue, having actually been professionally deporting illegal aliens for many years, but in times of crisis, leaders make new rules.