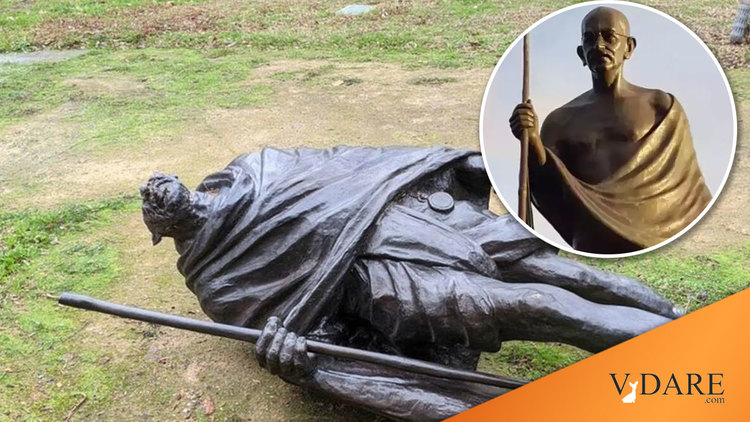 And Then They Came for Gandhi ...

From the Davis Enterprise in Northern California:

The statue in Davis’ Central Park of Mohandas K. Gandhi, the Indian lawyer and independence leader, was found Wednesday morning toppled and lying on the grass next to its plinth. The 6-foot-tall, 950-pound bronze likeness appeared to have been sawed off at the ankles and half its face was severed and missing.

… The statue provoked controversy and conflict from the moment the city acquired it, with community groups opposing it even before its installation. Donated in 2015 by the Indian Council of Cultural Relations, the statue was unanimously approved by the City Council and set to be erected in Central Park.

After this approval, however, locals and members of the Organization for Minorities of India — a Lathrop, Calif.-based group — voiced opposition to it. In August 2016, opponents of the statue traveled from Antioch, Mendocino, Yuba City, Sacramento and Elk Grove to attend a Davis City Council vote on a motion to reconsider the statue.

Critics of the statue argued that, despite his achievements, Gandhi had character flaws so reprehensible that he should not be memorialized in a public park. “It is undisputed that Gandhi was a hero to many,” Sacramento businessman Amar Shergill said at the meeting. “He was also a bigot and predator of members of his own family.”

After a heated public comment period, the council voted 3-2 to move ahead and install the statue. “It’s a symbol of peace,” Councilwoman Rochelle Swanson said. An unveiling ceremony was held on Oct. 2, 2016, Gandhi’s birthday, which is commemorated each year as an International Day of Nonviolence.

Since then, the statue has been a target of repeated protests and vandalism. Last June, in the wake of racial justice protests that targeted Confederate and white supremacist statues across the United States, the Gandhi statue was spray painted with expletives and the word “rapist.”

Gandhi, who was assassinated in 1948, is known for developing the philosophy of satyagraha, a form of nonviolent resistance, which he used to liberate India from British rule and which inspired civil rights leaders around the world. Gandhi had a direct influence on Dr. Martin Luther King Jr., whose Southern Christian Leadership Conference used nonviolent direct action to resist white-supremacist oppression and terrorism.

In addition to championing civil disobedience, Gandhi had a history of anti-Black racism, sexual abuse and, according to some critics, an acceptance of India’s caste system. Evidence of Gandhi’s racism and abusive sexual experimentation is incontrovertible, acclaimed Indian historian and Gandhi biographer Ramachandra Guha told National Public Radio in 2019.

Gandhi spent much of his early professional life in South Africa. While living there, he advocated for racial segregation and sought to advance the interests of Asians by distinguishing them from Black South Africans.

In an 1896 speech in Mumbai, Gandhi said the Europeans in South Africa wished “to degrade us to the level of the raw kaffir whose occupation is hunting, and whose sole ambition is to collect a certain number of cattle to buy a wife with, and then, pass his life in indolence and nakedness.” Elsewhere, Gandhi said Black South Africans, whom he referred to using a racial slur, “are troublesome, very dirty and live like animals.”

Reportedly obsessed with his own celibacy, Gandhi developed a habit late in life — after his wife died in 1944 — of sharing his bed with naked women, including his personal doctor and his two teenaged grandnieces, purportedly for the purpose of testing his willpower to abstain from sex. The episodes were “inexplicable and indefensible,” Guha wrote.

The Indian government has donated numerous busts and statues of Gandhi worldwide, from Russia to Morocco to Ghana. Similar statues were also given to New York, Atlanta, St. Louis and San Francisco. The statue in Davis was donated at a cost of $22,000 to the Indian government.

If you ever want to read an epic takedown of Gandhi, there’s Richard Grenier’s review of the movie Gandhi in Commentary in 1983. Here’s William F. Buckley interviewing Grenier.

On the other hand, I’m more of a glass-half-full guy when it comes to statues. Everybody has flaws, but some have achievements, and Gandhi was one of the latter as well as one of the former.