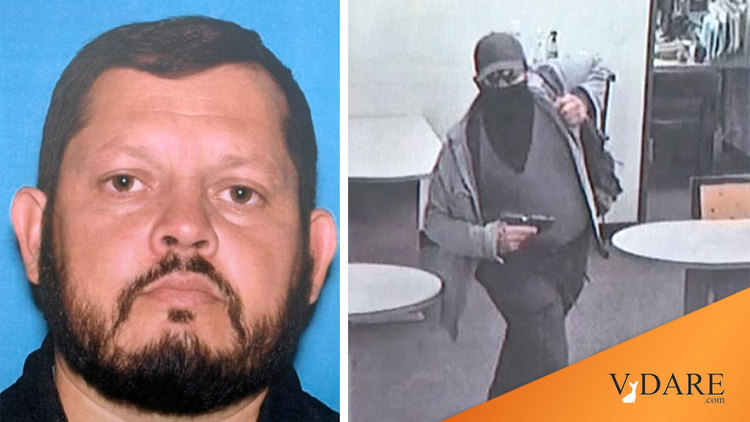 Four people have been murdered, including a child, by a man named Aminadab Gaxiola Gonzalez. This apparently included his family members and some employees of a real estate agency.

This is not being promoted as a white supremacist shooting.

WHY DIDN'T I HEAR ABOUT THIS?

Aminadab is a Biblical name, also used by Mormons,  more popular in Mexico than the US, Gaxiola is a Mexican (Aztec, not Spanish) name, and Gonzalez, of course, is a Spanish name.

Here's what the Fox News and law enforcement authorities are not saying so far:

VDARE.com maintains a record of "Immigrant Mass Murder", where an immigrant commits a lot of murders in America. A sub-category is Immigrant Familicide, where an immigrant wipes out his whole family. Then there's a slightly different category we call "Disgruntled Minority Massacre," in which a member of a minority group, having been fired or disciplined at work, shoots up his workplace killing his (mostly)  white co-workers, employers, or supervisors. That qualifies as an anti-white Hate Crime, although it's never reported as such.

While familicide is usually a same-race thing, the Disgruntled Minority Massacre usually hits victims of a different race.

In this case, the victims may have been Mexican immigrants themselves, since the real estate agency, Unified Homes, sold mobile homes to recent immigrants:

Unified Homes, the site of a mass shooting in Orange, known for efficient, friendly service

Shock spreads through some Orange County mobile home parks as news of mass shooting sinks in.

The Facebook video shows a happier day at Unified Homes.

A family gathered in the unfurnished dining room of their new mobile home, standing under a red “Congratulations” banner, champagne glasses in hand.

An unnamed sales agent explains in Spanish that this is the day the family received their new property.

“Congratulations, blessings and enjoy your new home,” the agent says.

On Thursday, however, shock spread through some of Orange County’s mobile home parks as word spread that Unified Homes – a mobile homes sales office in Orange – was the scene of the mass shooting they heard about on the news the night before.[More]

So it seems that victims may have been the same race as Gonzalez, and the shooting may have involved foreclosure or something.

For more about Hispanic Real Estate Agents in America see

If anyone sees, in a news story, any information on Gonzalez's immigration status, please email me at jfulford@vdare.com.