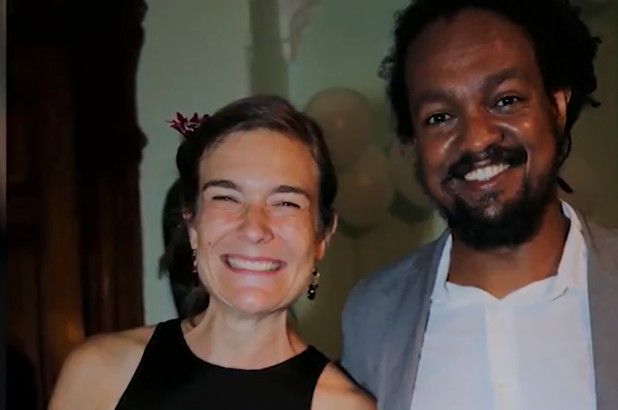 Yonathan Tedla killed wife Jennifer Schlecht and their daughter Abaynesh in a Harlem apartment, then killed himself. Tedla and Abaynesh are Eritrean or Ethiopian names. (Eritrea and Ethiopia are more or less the same place, from our point of view, but it's a distinction that matters very much to the locals.)

"Immigrant Familicide" is one part of the phenomenon of "Immigrant Mass Murder" we cover here. See a recent case here, which includes a lengthy list of previous cases.

Jennifer Schlecht was a white, American woman. How did a woman like that happen to marry an Ethiopian? Well, the NY Post says she was "a career humanitarian who fought to protect women and girls in poor, war-torn countries." [Harlem murder-suicide dad Yonathan Tedla warned he was ‘not going to lose’ divorce battle, By Laura Italiano and Natalie Musumeci, NY Post, November 7, 2019] She apparently met him at Columbia.

Of course, what makes the countries war-torn (and a danger to women and girls) is the local male population. Apparently, before her death she realized her mistake and tried to escape.

Schlecht, 42, had planned to get a court order to keep Tedla, 46, away from her and the girl out of fear for their lives, the tragic mom’s father told The Post.

“She wanted an order of protection due to some of his threats,” said the father, Kenneth Schlecht, 75.

Tedla had threatened that if she tried to divorce him, he would win and she would lose.

“He’d destroy her, or take them all out if she pursued a divorce,” the father said.

He believes his daughter had hoped to get a protection order on Tuesday, but found the courts were closed for Election Day.

Of course, a protection order means very little to a man willing to commit murder-suicide. In New York, women are not allowed to have guns to protect themselves.

She was found dead with her daughter inside their second-floor apartment the next day.

Law enforcement sources believe Tedla decapitated the mom with a knife, then slit the girl’s throat before hanging himself from the girl’s bedroom door.

Schlecht, a career humanitarian who fought to protect women and girls in poor, war-torn countries, was found on her bathroom floor with her own head lying in her lap, sources told The Post.

A few stories day Tedla was "originally from" Ethiopia. "Originally from" is a way of not saying "Ethiopian immigrant." 39 results on Google include the word "Ethiopia," and 1270 do not.