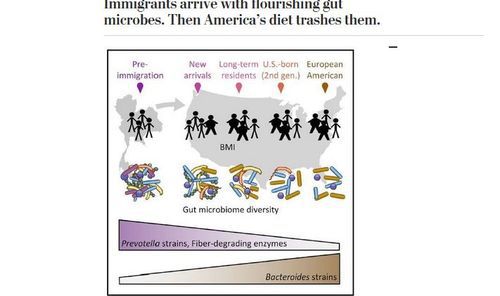 WASHINGTON POST Says American Diet Bad For Immigrants. So? They Can Stay Home!

Is there no problem for which the United States can’t be held responsible?

In the United States, immigrants in the study ate foods richer in sugars, fats and protein. Microbiomes changed within months of moving. “People began to lose their native microbes almost immediately after arriving in the U.S.," Knights said. “The loss of diversity was quite pronounced: Just coming to the USA, just living in the USA, was associated with a loss of about 15 percent of microbiome diversity.”

Obesity rates among many of the study immigrants increased sixfold. Those who became obese also lost an additional 10 percent of their diversity. “And the children of immigrants,” Knights said, “had yet again another 5 to 10 percent loss.”

Some of the photos from the migrant horde show otherwise, of course. But if this is true, I have a solution:

Tell the immigrants to stay home.