After North Carolina: Q - Will Whites Vote For The AdelZuck Party? A - Not Enough 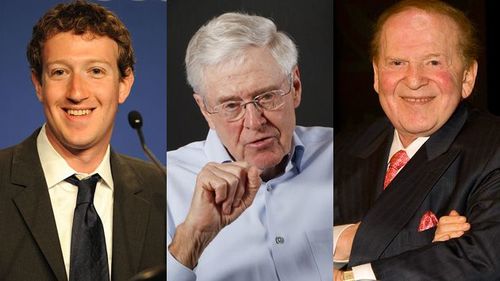 First the good news: the answer to my question Can NeoCons, Slave Power Unseat Walter Jones, North Carolina’s Best Immigration Patriot? was negative. Jones defeated the massive funding of the Israel Lobby and the Slave Power combined: an astonishing achievement. VDARE.com salutes him and the voters of NC-3.

The bad news is extensive. Establishment operative Thom Tillis and the disgusting Renee Ellmers won, and did Cheap Labor Lobby servant David Rouzer in NC 7th. He replaces the retiring Mike McIntyre, one of the last Blue Dog Democrats, who has a Numbers USA career ranking of B+ and will be sadly missed.

…when it comes to how much the two factions have spent on the race, it's not been much of a contest.

Tea party groups have reported spending less than $200,000 on yards signs, phone banks and online ads to boost Greg Brannon… Pastor Mark Harris, another candidate aligned with the tea party wing, has not seen any independent spending on his behalf.

Meanwhile, Tillis has been lifted by nearly $2.5 million in television ads and mailers paid for by groups such as American Crossroads, the U.S. Chamber of Commerce and the National Rifle Association, according to campaign finance reports and public filings with local TV stations…

Already, more than $18 million has been plowed into television airtime, according to public filings with local stations. And, 90 percent of all TV ads in the race have been paid for by outside interest groups, according to a recent report by the Wesleyan Media Project.

In NC-2 Frank Roche at last report had raised less than $25,000 while Ellmers was approaching $1 Mm.

And of course, Daniel Horowitz is correct

.. as we pointed out last week, there is no great mystery behind the establishment’s victory.  There is no enigma.  It’s all about money and lies…

As I noted in Mark Zuckerberg + Congresscritter Renee Ellmers (NC2) = Dishonesty And Treason the Plutocrat spent several hundred thousand dollars for Ellmers flatly asserting she was against Amnesty which the candidate had repeatedly contradicted.

This being the case, what is really astonishing here is how low the vote share of the winners was. Tillis could only manage 46% of the vote which would have forced him into a runoff in neighboring South Carolina.  A massive 41% of the vote in NC-2 was cast against Ellmers for a candidate who could barely afford to drive around the district.

The Stupid Party is headed dead straight for low white turnout and defeat. The comment threads seethe with promises not to vote. It was difficult enough to get Southerners to vote Republican. They and American whites generally will not be attracted to an Invade the world/Invite the world platform.

Turning the GOP into the AdelZuck party (H/T Talk Radio Listener) is a sure loser.

The sick thing is that those buying this disaster do not care. The Democrats will just as readily obey them on foreign policy and Amnesty and they prevent the otherwise inevitable evolution of the GOP into the Generic American Party - which may well be their true objective. The Consultants/Super PAC operators do not care either: they get rich in the process.