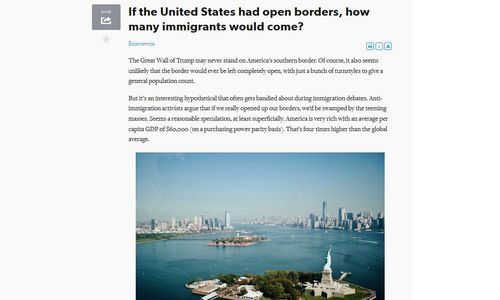 AEI: "If the United States Had Open Borders, How Many Immigrants Would Come?"

If the United States had open borders, how many immigrants would come?

… Anti-immigration activists argue that if we really opened up our borders, we’d be swamped by the teeming masses. Seems a reasonable speculation, at least superficially. …

We have no way to know for sure how many people around the world would move to the United States if our legal barriers were erased tomorrow, but we do know how many say they would like to come — if they had the means and the opportunity. For more than a decade, Gallup has polled adults in countries around the world to see how many would move permanently to another country if they had the chance. About one in five potential migrants — or about 147 million adults worldwide — name the US as their desired future residence.

Third, according to Gallup, a total of 640 million people say they want to move to a First World country.

So if the U.S. were to have Open Borders, but not other desirable destinations, the number would be a lot higher than 147 million. Of course, long before 640 million or so people arrived, the desirability of moving to the US would plummet.

But surely far fewer than 147 million would actually show up even with open borders. Legal barriers are not the only barriers to migration. Consider residents of Puerto Rico, who can freely move to the mainland United States because they are US citizens.

This is especially surprising because a Pew Research Center survey over the same time period found that 89 percent of Puerto Ricans “were dissatisfied with the way things were going on the island.”

As of 2014 perhaps 3/5ths to 2/3rds of all Puerto Ricans lived in the 50 states rather than PR, so this doesn’t seem like a particularly reassuring example. And since 2014, things have gone really badly in PR and maybe we are now up to perhaps 70% of Puerto Ricans being on the mainland (or Hawaii, which has more than a few Puerto Ricans from old sugar cane days). And that’s despite lavish tax breaks and welfare to keep them on the island.

The Democrats benefit from letting PR fall apart via corruption, incompetence, and apathy, so that Puerto Ricans will move to Orlando and vote Democratic. We’ll find out whether that strategy has already tipped Florida blue shortly.