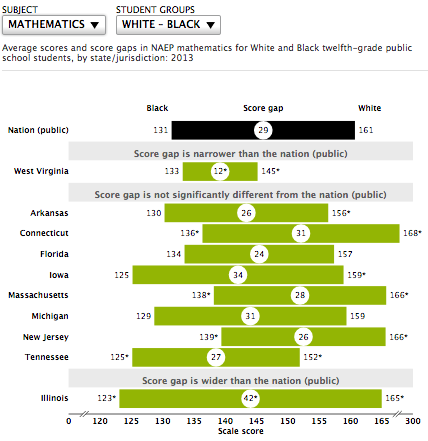 The federal government's National Assessment of Educational Progress test results for 12th graders in readin' and 'rithmetic are now out for 2013. The feds have a nice website to display the numbers. I've been following these kind of test score stats for almost as long as I've been following baseball statistics, but I have to admit that seldom if ever do any Mike Trouts come along to add excitement to my peculiar hobby.

Above is a graph of the ten states where the NAEP had big enough sample sizes to break out The Gap (white-black, in this graph on the Math test). Of the ten states, the only one where The Gap is notably smaller than in the nation at large is West Virginia. How has West Virginia accomplished this goal that has obsessed policymakers and pundits for most of my lifetime? By having many of the smart white people in West Virginia move to greener pastures in North Carolina, Virginia, Georgia, and so forth.