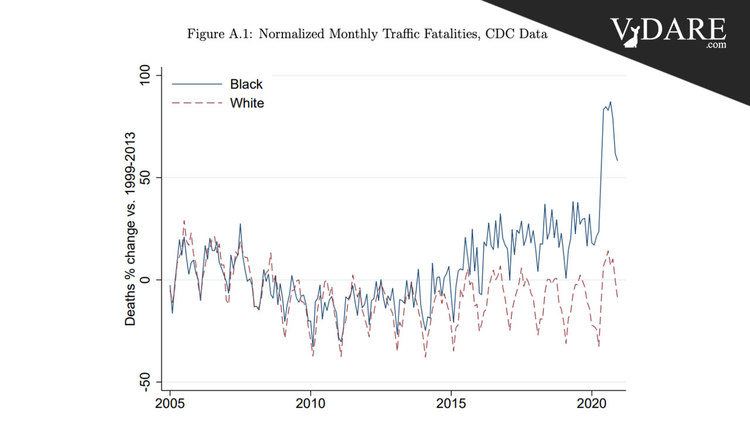 In a new NBER working paper, some academic researchers finally note what I’ve been banging on about since June 2021: It sure looks to me like the Ferguson Effect in 2015 onward and the Floyd Effect in 2020.

The Y-axis really should include zero to give you a sense of how big the increase in black traffic deaths has been since Ferguson in 2014. It’s up a lot but not quite as much as it looks when you don’t start the Y-Axis at zero.

Their monthly version from CDC motor vehicle accident death data looks very much like my graph, although I go out into early 2022: In 2015, for the first time in nearly forty years, the rate of motor vehicle fatalities for Black Americans exceeded that of white Americans.

By 2020, the gap in death rates stood at 34%, accounting for approximately 4,000 excess deaths between 2014 and 2020. This disproportionate increase occurred in nearly all states, in rural as well as urban areas, and was shared by drivers of all ages and genders. We consider a variety of potential explanations for the emerging race gap including race-specific changes in time spent driving, the circumstances of driving, the quality of medical care for crash victims, decreases in other types of mortality, changes in policing, and risky driving behaviors such as speeding, driving without a seat belt and driving while intoxicated. We can rule out many of these factors as important contributors to the race gap, but find evidence for two of them.

The first is opportunity: Relative to white Americans, Black Americans are spending more time in vehicles than they have in the past. Changes in time spent driving, while modest, likely explain an important share of the emergent race gap.

Maybe, but I don’t really see it: here’s their graph, and note that the Y axis runs from 40 to 80 minutes in a private vehicle per day: Note that this graph stops in 2019 so we are left without a clue about the huge increase in black traffic deaths from June 2020 onward.

The second is a relative increase in drug use, manifested by a quadrupling of the rate of overdose deaths among Black Americans after 2014. Increased drug use appears to have resulted in a concomitant increase in fatal crashes involving drivers under the influence of drugs. Earlier in the 21st century, the Sacklers peddled oxycodone and the Mexican cartels pushed black tar heroin in boring places with a lot of downscale whites like Kentucky, avoiding shooty black inner cities as likely to attract attention. So white overdoses outnumbered blacks per capita about a decade ago.

But then in the mid-2010s, fentanyl arrived in the inner city, often mixed with other drugs such as meth (e.g., George Floyd) and black overdoses soared. So maybe blacks crashed so much starting a week after George Floyd’s death because they saw it as a signal to drive on drugs? That’s not implausible, but it still ties into the depolicing Floyd Effect.

Finally, we consider whether the emerging race gap is explained by the so-called ”Ferguson effect,” the idea that police officers have pulled back from enforcement activity in recent years. On the one hand, traffic stops made by police officers do appear to have declined after 2014. However, the decline in traffic stops does not appear to be race-specific and there is little evidence of a broad increase in risky driving behaviors like speeding and driving without a seat belt.

Here’s their graph from survey data up through 2018. Probably the top center one, Men 25-44, is the one to focus on to avoid getting overwhelmed by data points. Black and white guys say they get stopped by the cops about the same amount (although whites drive more miles). Stops declined from the 2011 survey to the next one in 2015 during the Ferguson Effect, then bounced up a little in 2018 during the pro-police Trump Administration.

Unfortunately, they don’t provide data on the racial reckoning from May 25, 2020 onward: Cops have a hard time telling, especially at night, the race of a bad driver, so they can’t really pinpoint back-off pulling over blacks without backing-off pulling over less prestigious races as well.

… While we cannot conclusively rule it out, a law enforcement-led explanation for the new race gap in traffic fatalities requires that decreases in traffic stops were more impactful for Black Americans compared to other groups …

In other words, do you really believe that blacks driving safely depends more upon fear of the visible cops while for other races, the cops can vanish and their consciences will still tell them somewhat to drive safely?

Yeah, I could definitely see that. Indeed, that appears to be what happened in 2020: In the last seven months of the year, following George Floyd’s death, black traffic fatalities were 36% higher than in the same seven months in 2019 while nonblack deaths were up 9%.