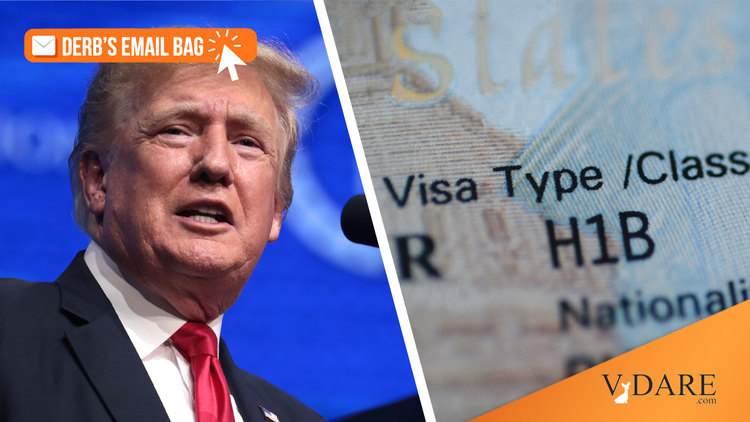 Just a few. First a couple from last week’s podcast.

• The Trump administration and H-1Bs.  I relied on a 2021 Forbes article about how energetic Trump’s people had been in trying to curb H-1B visa abuse.  A listener who has been at the sharp end of that abuse begs to differ.

Thanks for your article about the recent tech layoffs and H-1Bs.

For the record, I supported Trump enthusiastically in his primary and first general, even sending him a campaign donation out of my rapidly diminishing severance. I reluctantly voted for him in 2020 after feeling great disappointment.

I used to live in [name of city] which is absolutely over-run with H-1Bs, mostly from India. I struggled to find work in tech in the area and eventually moved away—I was almost exclusively contacted by Indian recruiters for interviews with exclusively Indian managers who most certainly wouldn’t hire outside of their own caste much less race.

This issue is near and dear to my heart, having been THE reason I supported Trump in his primary and first general.

”Here I should give credit to Donald Trump and his administration. They fought hard against the guest-worker racket, with some success”;

I have to disagree.

Also during his first campaign, Trump had published his promise to ”forever end the use of the H-1B visa as a source of cheap labor.” After he was elected this was removed from his website.

Shortly after he was elected, Trump’s speech at the tool factory was a major disappointment. He did basically nothing except command USCIS to report back to him in 6 months with recommendations (which he failed to even try to enact until right before his next election).

Trump appointed Chad Wolf, a former H-1B lobbyist, to run the DHS. That certainly is not fighting hard against the guest worker racket.

Not long after, Sarah Blackwell said that Trump, his campaign, and his staff (including Stephen Miller) had gone dark—complete radio silence and failure to communicate, likely knowing their neglect of this promise made a lot of supporters very unhappy (myself included).

The only actual reforms he even attempted while [L. Francis] Cissna was running USCIS were far too little and far too late, mostly materializing just before the supposed election of 2020.

I suspect Jared Kushner had a lot of influence with Trump to abandon this issue and those of us who supported Trump because of his stated stance on it, but ultimately I still blame Trump for even having Jared Kushner anywhere in his orbit besides at Passover dinners with the grandkids.

• KFC’s pogrom promotion.  On my item about Kentucky Fried Chicken trying to use Kristallnacht for promotional purposes in Germany,  a listener in Israel offered this:

As to Kristallnacht, I imagine you know about the Goethe Institute, the German cultural organization with branches around the world, funded by, among others, the German federal and state governments. There are a few chapters in Israel. This Kristallnacht, the Tel Aviv office... as going to have a panel discussion—sponsored by the Rosa Luxemburg foundation, whatever that is, naturally—on Kristallnacht on ”Holocaust, Nakba, and German Remembrance Culture.” The last two words are a single German word, of course, but I can only guess at what it means. ”Nakba,” Arabic for ”disaster,” is the term given to the experience of Palestinian defeat in the 1948 war and is a favorite club to attack Israel with.

After a diplomatic uproar, the event was delayed to Sunday. Yay.

My only thought was, even if you *had* to have an event comparing the creation of the State of Israel to the Holocaust, and even if it *had* to be on Kristallnacht, did it *really* have to be sponsored by the German government? I’ll take a stupid marketing campaign by German KFC any day over that.

And then some comments on my October Diary.

• No laughing matter.   My segment on the longstanding prejudice against laughing among Europe’s cultivated classes prior to (I guessed) the Romantic Age stirred suggestions from two different readers that I forward a copy of that segment to Tucker Carlson.

• Leaf blowers.  Readers tell me I’ll do my lawn a favor if I quit leaf-blowing and raking and just let the leaves lie there and rot. That would work fine for me, except that the durn leaves won’t just lie there. The wind blows them around and they drift up into unsightly piles.

The leave-to-rot method anyway sounds suspiciously ”green” to me. Does it help to alleviate climate change? (Reaches for his blower.)

• Moon-faced Balts.  The October Diary contained a link to one of my ”Straggler” columns from way back, where I wrote about strolling around my town’s Fall Festival.  I listed the wonderful diversity of physical types on display:

That got me an indignant email from a Balt lady. (Baltress? Baltine? Baltette?) Who was I calling ”moon-faced”? Didn’t I know that moon face is a medical condition?

No, I honestly didn’t, although I do now, having just looked it up.  That’s not the kind of face I had in mind, though.

I somewhere—I have totally forgotten where—picked up the notion that Balts tend to have faces that are more circular, flatter, and paler than the European average. Do they? Eh... Anyway, I meant no offense.

• Vocalizing Russian. I have readers of my diary annoying the hell out of their friends & family members (I imagine) by trying to vocalize the Russian ”sixty-one” vowel (ы) using the instructions I got from my own Russian coach: ”Make an ’oo’ sound but with your lips shaped for an ’ee’ sound.”

The email consensus is that ы is not a possible sound. Well, Russians make it, trust me... or find a Russian to demonstrate for you.

One reader thought that ”luchshe” was even harder to vocalize. Maybe: but if you want to engage in a serious way with Russian literature, be warned that Pushkin’s great verse novel Eugene Onegin has a ”luchshe” already in the fourth of its 5,446 lines.  (And there’s a stressed sixty-one vowel in the following word. In unstressed positions ы can be faked with a short English ”i.”)