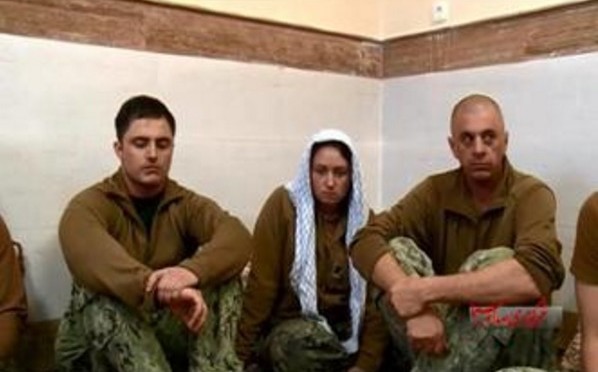 A Huge Propaganda Coup For The Iranians—Were Sailors Ordered Not To Fight Back? 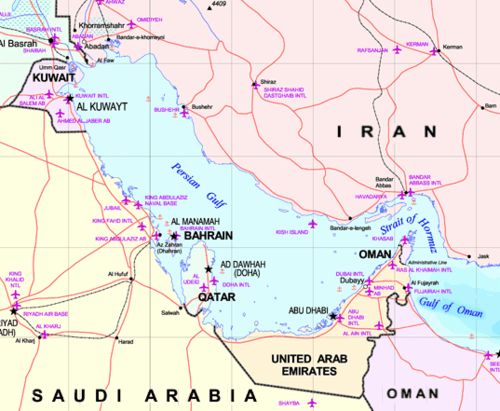 Standard procedure at Radio Derb, when there shows up a story like this that calls for comment, is first to get the ascertainable facts in line. So off I went to Google Maps for a quick reminder of the geopolitical layout around the Persian Gulf.

It's not that complicated. The main body of the Gulf goes very roughly north-south, with Iran on the east side and Saudi Arabia on the west side, separated by 120 miles or so of open sea—the width of the Gulf. Up at the top on the Saudi side is Kuwait. Halfway down on that same side is Bahrain, an offshore island.

So here came my first question. These American patrol boats that were captured are riverine craft, not made for the open sea. You can get from Kuwait to Bahrain by hugging the Saudi coast, which in a riverine craft you should definitely do. There is no reason ever to be closer to the coast of Iran than a hundred miles. So, question: How did they get into Iran's territorial waters, as the Pentagon says they did?

Ah, but the AP report quotes the Pentagon saying the boats were captured, quote, "near Farsi Island in the middle of the Gulf." So back to Google Maps to look for Farsi Island. Google Maps never heard of it.

I pull down my trusty Times Atlas of the World, 1975 edition. No entry for Farsi Island. Off to regular Google. Yep, got it, smack dab in the middle of the Gulf, sixty miles from either shore. So again I ask: What were these riverine craft doing sixty miles out in the open sea?

Back to the Pentagon statement. " … some type of mechanical trouble with one of the boats caused them to drift into Iranian territorial waters near the island …"

Say what? Absent strong winds or currents, a boat on the open sea drifts at around walking pace—maximum four or five miles an hour. To drift from close to the Saudi shore to close to Farsi Island—fifty miles minimum—would take at least ten hours. Video of the capture, which I'll get to in a minute, shows windless weather. Currents in the gulf go up and down it, not across it, as they'd have to to get you from the Saudi shore to Farsi Island.

And there were two boats, of which, by the Pentagon account, only one had mechanical trouble. Why couldn't the other one just tow it?

From there things just got weirder, and not in a good way. Wednesday Iran issued video of the actual capture of the two boats. The video showed the ten U.S. crew members kneeling on the deck of one boat with their hands on their heads. No large ships can be seen in the video; it looks as though it was patrol boats versus patrol boats, although it's hard to be sure.

Later we got video footage of the captain of one of the U.S. vessels, sitting with his fellow crew members, in Iranian captivity, being interrogated by Iranians.

Why had they penetrated Iran's territorial waters? he was asked. The captain replied that it was a mistake, for which he apologized.

The captain was asked how the Iranians had behaved towards him and his crew members. Replied the captain, quote, "The Iranian behavior was fantastic … We thank you very much for your hospitality."

While these exchanges were taking place the Iranian cameraman panned across at the other U.S. crew members. One was a female. She had been given a rather fetching blue and white shawl to cover her head with. The servicewoman's hands were free and she could have pulled the shawl off, but she didn't. That interview takes the whole thing from weird to radically weird. The interview itself violates both the Geneva Convention and the U.S. military Code of Conduct. Precise quote from the latter, quote:

When questioned, should I become a prisoner of war, I am required to give name, rank, service number and date of birth. I will evade answering further questions to the utmost of my ability.

Come to think of it, the Code of Conduct also says, quote: Those U.S. patrol boats are well armed, as the Iranian video of the capture was at pains to show, laying out all the weapons to be seen. Shouldn't our guys have made a fight of it?

On the other side, our military personnel are under the orders of their superiors. We haven't heard of any communication problems, so presumably our sailors had time to communicate the situation to their commanders. If they had orders from their commanders, possibly even from the Pentagon, to yield without a fight, to kneel, and to apologize, then they would have been under strong psychological pressure to obey those orders, whatever they might have felt about them.

So I'm not second-guessing our servicemen here. I'm too intimately close to the U.S. military to want to do that, anyway. I'm just pointing out that the whole affair was highly peculiar, and the facts as presented don't add up.

Of one thing at least there can be no doubt: This incident was a huge propaganda coup for the Iranians, and for Islamia in general. See the infidels kneel! Hear them apologize! See the kaffir woman forced to cover her shameless naked hair!

It's not the first such show they've put on, either. We tend to forget these things, but nine years ago there was a very similar incident involving the British Navy. Fifteen British sailors were seized by Iran while searching a cargo ship. They were held for two weeks. The one woman among them was made to wear a headscarf. They apologized and thanked their captors on Iranian TV. They even used the same word for the Iranian treatment of them as our patrol-boat captain used: "fantastic." You might almost think the Iranians have this scripted.

Again, I'm loth to second-guess our servicemen, or even our diplomats—not even our shallow, vain, and foolish Secretary of State. Given the number of open questions here, it's possible all was done for the best.

Still, it would be really satisfying if, the next time some third-rate towel-head despotism decides to humiliate our service personnel for propaganda purposes, we made them pay a price for it. A couple of capital ships would be a fair price, I think; bows under, screws in the air, slipping gently below the waters of the Persian Gulf.