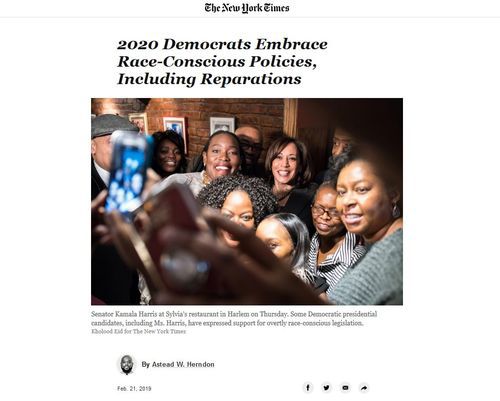 2020 Dem Primaries Are Going To Be Lit: Kamala And Fauxcahontas Call For Reparations To Blacks

From the very first day of the 2020 presidential race, when Senator Elizabeth Warren of Massachusetts blamed “generations of discrimination” for black families earning far less than white households, Democratic hopefuls have broadly emphasized racial justice and closing the wealth gap in their policy platforms.

But in recent weeks, some candidates have started embracing specific goals and overtly race-conscious legislation that even the most left-wing elected officials stayed away from in recent years.

Last week, on the popular radio show “The Breakfast Club,” Senator Kamala Harris of California agreed with a host’s suggestion that government reparations for black Americans were necessary to address the legacies of slavery and discrimination. Ms. Harris later affirmed that support in a statement to The New York Times.

“We have to be honest that people in this country do not start from the same place or have access to the same opportunities,” she said. “I’m serious about taking an approach that would change policies and structures and make real investments in black communities.”

Ms. Warren also said she supported reparations for black Americans impacted by slavery — a policy that experts say could cost several trillion dollars, and one that Barack Obama, Hillary Clinton, Bernie Sanders and many top Democrats have not supported.

The Warren campaign declined to give further details on that backing, but it came amid her calls for the federal government to provide special home-buying assistance to residents of communities that were adversely affected by “redlining,” the discriminatory practice of denying mortgages, usually in poor and nonwhite areas. She also announced a sweeping universal child-care proposal that could strongly benefit minority communities that often have limited early childhood services.

The morally [?] driven policy goals of Ms. Harris and Ms. Warren reflect a broader shift in the importance of race and identity issues in the Democratic Party, according to several scholars and political leaders who focus on the intersection of race and politics. While Democrats have long cast themselves as more inclusive than the Republican Party, grass-roots organizers and many liberal voters of all races are now pushing elected officials to go further on policies of racial equality, regardless of any political calculations. …

That two leading Democratic candidates have embraced reparations — the concept that the federal government should both acknowledge the ongoing legacy of slavery and discrimination and provide compensatory payment to those affected — is a major shift from past presidential campaigns and a win for activists who have tried to push the issue into the mainstream for decades. Julián Castro, the former cabinet secretary who is also running for president, has also indicated that he would support reparations.

Mr. Sanders, the Vermont leftist whose rhetoric of a political revolution won him throngs of supporters in the last Democratic primary and disrupted the party establishment, dismissed the idea of reparations as politically unpalatable in January 2016, upsetting some racial justice activists who found his answer hypocritical….

Another sign of the party’s shift on race: Representative Alexandria Ocasio-Cortez, the New York Democrat whose bold policy ideas and devoted national following have upended Capitol Hill, also voiced her support for reparations earlier this month.

“Until America tells the truth about itself, we’re not going to heal,” Ms. Ocasio-Cortez said at a forum with Ta-Nehisi Coates, the writer whose landmark 2014 article, “The Case For Reparations,” helped thrust the issue back into American consciousness.