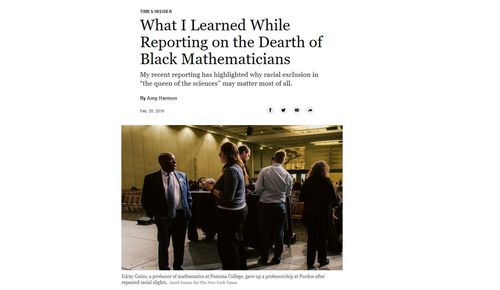 NYT: "Why Racial Exclusion in 'The Queen of the Sciences' May Matter Most of All"

What I Learned While Reporting on the Dearth of Black Mathematicians

My recent reporting has highlighted why racial exclusion in “the queen of the sciences’’ may matter most of all.

… There were several reasons I felt that the toll this type of bigotry — which often goes undocumented — takes on black mathematicians was worth reporting on.

One is the sheer magnitude of the underrepresentation of black academics in research math. According to the American Mathematical Society, there are 1,769 tenured mathematicians at the math departments of the 50 United States universities that produce the most math Ph.D.s. No one tallies the number of black mathematicians in those departments, but as best I can tell, there are 13. That comes to seven-tenths of 1 percent of the total — perhaps as far as any job classification gets from accurately reflecting the share of black Americans in the general adult population, which stands at 13 percent.

Maybe it seems like splitting already ludicrously fine hairs, but in biomedicine, the share of black scientists who receive major research grants from the National Institutes of Health (1.4 percent) is about twice as high as the share of black mathematicians on the tenured faculty of top United States math departments. The share of employees at Facebook who are black (4 percent) is roughly six times higher; the share of black graduates from United States medical schools (6 percent), nine times higher. Among the film and television agents at Hollywood’s top four talent agencies, according to a recent New York Times article, black agents number in the dozens, which makes their share roughly eight times that of the black mathematicians.

“To say that I feel isolated is an understatement,” Dr. Goins wrote.

Then there is the cost of that underrepresentation to the public. In the private sector, shareholders bear the opportunity lost by excluding demographic groups. But mathematics research is funded largely by taxpayers. Federal agencies distributed some $350 million in grants to American universities for basic math research alone in 2016. And math — “the queen of the sciences,” as the 19th-century mathematician Carl Friedrich Gauss is said to have labeled his discipline — underpins virtually all of the tens of billions of dollars worth of basic science research that Americans support each year.

“How much further forward might mathematics have gotten today,” Richard Taylor, a prominent (white) mathematician at Stanford, wrote in an email, “if we had attracted that talent?”

And there is the matter of the people who don’t get a shot at charting the mathematical universe for a living. Most of the hand-wringing about underrepresentation of racial minority groups in science, technology, engineering and math is centered, for good reason, on the economic injustice: So-called STEM jobs, whether in finance or machine learning or academia, pay nearly twice the national average, according to the Bureau of Labor Statistics.

But research mathematicians frequently suggest that their work is closer to poetry or painting than other sciences, a concept perhaps best-illustrated by an XKCD cartoon bearing the legend “Fields Arranged by Purity,” with physicists claiming dominion over chemists, biologists, psychologists and sociologists, all spaced the same width apart (“it’s nice to be on top”) until the figure representing the mathematicians, far off in the distance, turns to notice the cluster to her left. “Oh hey,” she says. “I didn’t see you guys all the way over there.”

As Daniel Zaharopol, the director of a program for mathematically talented low-income middle-school students, put it when I interviewed him for a 2017 article: “Math is beautiful, and being a part of that should not be limited to just some people.”

Some people claim that there are not many black research mathematicians because African-Americans are not as intelligent as other races. These people, whom I have reported on for other stories in recent months, almost invariably use mathematical accomplishment as their yardstick for intelligence. They note that no individuals of African descent have won the Fields Medal, math’s equivalent of the Nobel Prize. They lack any genetic evidence to explain the gap in average I.Q. scores between white and black Americans that they cite as the basis of their belief, or reason to think that a genetic trait would be impervious to social or educational intervention, or that high I.Q. is key to math ability, which Timothy Gowers, a 1998 Fields medalist, has attributed largely to “the capacity to become obsessed with a math problem.”

But I have been reporting on these topics for several years, and I am acutely aware that math prowess factors heavily into the popular conception of intelligence. There’s a vicious cycle at work: The lack of African-American representation in math can end up feeding pernicious biases, which in turn add to the many obstacles mathematically talented minorities face.

Nazi theory indeed specifically denies that such a thing as “the truth” exists. There is, for instance, no such thing as “Science”. There is only “German Science,” “Jewish Science,” etc. The implied objective of this line of thought is a nightmare world in which the Leader, or some ruling clique, controls not only the future but the past. If the Leader says of such and such an event, “It never happened” — well, it never happened. If he says that two and two are five — well two and two are five. This prospect frightens me much more than bombs — and after our experiences of the last few years that is not such a frivolous statement.