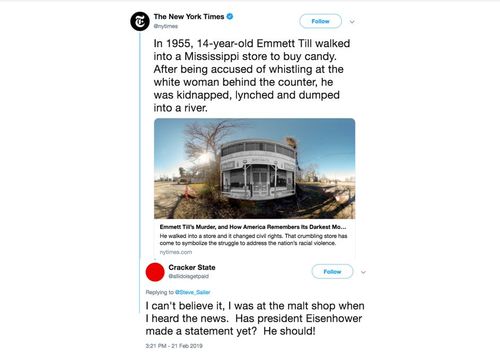 Forget About Jussie Smollett's Fake Noose Lynching, the NYT Has Just Gotten Word of Stunning Late-Breaking News: Emmett Till Has Been Lynched! As I predicted in a February 15, 2019 iSteve post on the New York Times’ credulous coverage of Jussie’s Hate Hoax:

I imagine we’ll once again be deluged with NYT stories about late-breaking developments in the Emmett Till case.

Has J. Edgar Hoover personally taken command of the Emmett Till investigation yet? What do Democratic Presidential contenders Adlai Stevenson and Estes Kefauver have to say on this issue? I can’t wait for Edward R. Murrow’s CBS Evening Newscast to find out. Or do you think Walter Winchell will have the latest scoop? What do William Randolph Hearst and Lord Beaverbrook have to say?

The Emmett Till Effect
by Steve Sailer

… A subtle but likely more important issue, however, is the question of which true news gets emphasized. There is always vastly more news than a person can remember. Thus your picture of reality is inevitably distorted to some extent by the power of the media, what I call the Megaphone, to pound over and over into your head certain true news, but not other true news.

For example, consider two black teens who once were true news.

In 1955, Emmett Till was murdered by two white men who were quickly acquitted, making his story memorable for being one of the last examples from a long era of state-excused white-on-black civilian violence over black males hitting on white females.

In 1987, Tawana Brawley launched our present era of making up hate hoaxes against whites by claiming that the reason she got home late was because she was being gang-raped by six white policemen.

Which incident is more rationally relevant to 2018? But which does the prestige media consider more au courant? …

Last year, “Emmett Till” appeared in 72 different Times articles. And this year is on track for 92 stories about the 63-year-old tragedy.

In contrast, the name “Tawana Brawley” might seem of slightly less antiquarian interest. The New York teen launched the modern era of antiwhite hate hoaxes in 1987, a few weeks after the publication of the late Tom Wolfe’s Bonfire of the Vanities best-seller about the “hunt for the Great White Defendant.”

The talented young race-racket activist Al Sharpton, the basis for Reverend Bacon in Bonfire, latched on to Tawana’s tall tale and turned it into a huge national brouhaha before it was utterly debunked and her half-dozen victims exonerated.

For a couple of decades, this instructive New York-area story was mentioned in the NYT (often in profiles explaining how Reverend Al had matured since his Tawana Brawley days, or occasionally in references to Wolfe’s magnum opus) about half as often as Emmett Till.

But in the 2010s, Tawana Brawley has come up in only 15 articles versus 249 mentioning Emmett Till.

Now, The New York Times would no doubt answer that it is merely responding to the great surfeit of events related to the Emmett Till case, such as a spat over whether a white artist should be allowed to display a painting of Emmett or whether only black painters should make money off the sacred subject.

On the other hand, the Times takes pride that it traditionally sets the agenda for the rest of the news business. So if the Times says that in 2018 Emmett Till is breaking news while Tawana Brawley is ancient history, lots of other influential media folks will follow its lead.