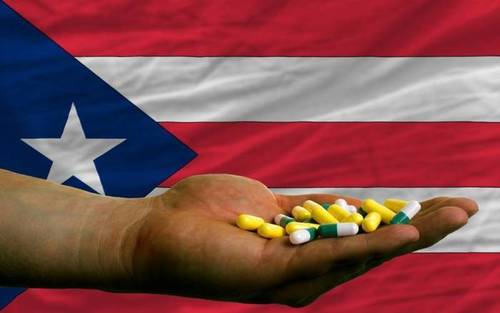 For those unfamiliar with the show, NPR's This American Life each week picks a theme at random and tells three or four anecdotes based on that theme for an hour.

Last week's theme was  "Not It". That is, various people or organizations who decide to absolve themselves of onerous responsibilities that normally would be theirs.

This show is interesting in that while not a public affairs or news show, it still sometimes manages to break news. Last week it did so. At least in my book it did.

In the show it was revealed that the government of Puerto Rico (such as it is) is shipping its drug addicted (mostly heroin, it seems) citizens to Chicago and presumably other US cities as well.

The addicts are recruited in Puerto Rico with promises of well-funded inpatient rehab clinics in the mainland US where they can get clean or at least not live like feral animals on the streets on San Juan. When they get to the US, the addicts find what basically amounts to unlicensed self-help AA programs and bare-bones staff that tells them how to go about tapping into the welfare system. The staff also takes away their personal ID so return home to Puerto Rico is difficult (at least that's my take on their reasons).

In the story the journalist tries to track down the officials behind this whole racket. She gets the run-around a lot but manages to glean a little of the truth. In Puerto Rico she gets more forthright answers. What's remarkable to me is that none of the officials seem very concerned about the questions that to me, constitutes a brazen scandal.

So here we see at least ONE jurisdiction in the US (ie Puerto Rico) that is taking steps via migration to better the lives of its citizens by removing troublesome residents. The only problem is that that it's Puerto Rico, which in my book shouldn't even be in the US and it's using the rest of the US as its dumping ground.

I also did a Google search and this story seems to have inspired some stories from the US cities receiving the addicts:

Of course there's no MSM coverage from big national outlets. Of course!

Ryan Kennedy (email him) has written us many letters and articles. He lives in Anchorage, Alaska.