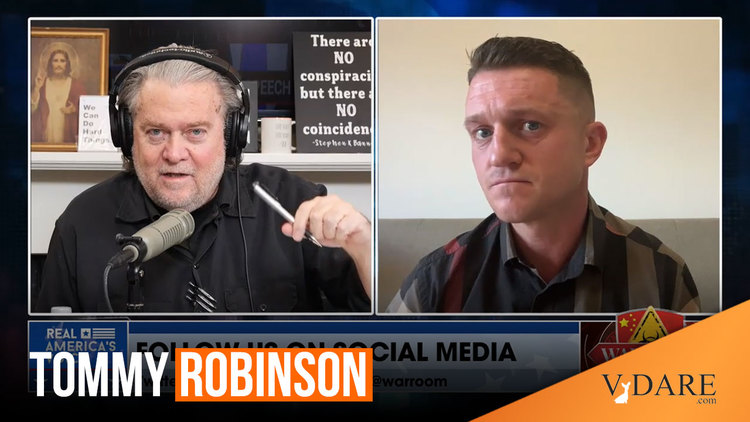 A West Texas Reader, Watching Tommy Robinson's War Room Report Of Grooming Gangs In England, Calls It A "Wake-Up Warning" For The U.S.

Re: Steve Sailer's blog post NYT: The Ultimate Danger Of Rotherham Is "The Stereotype Of The Asian Abuser And The White Victim"

Regarding the atrocities of Rotherham, Telford, and many other English cities. It now has had fairly large coverage by the WarRoom webcast hosted by Stephen K. Bannon.

Specifically what Robinson reported on the webcast was this 14-minute video clip that is a portion of Tommy Robinson's appearance, explaining the "grooming gangs" and multiple cover ups:

Rumble — Granddaughters Of Our Fighting Heroes In The UK Being Targeted

I don't know the numbers of listeners/viewers of the WarRoom webcast, but the podcast downloads total (for the 2 year life of the show) well over 100 million.

Tommy Robinson's presentation was, among other reasons to report this, my humble opinion, a wake-up warning to the USA as to what is headed our way.