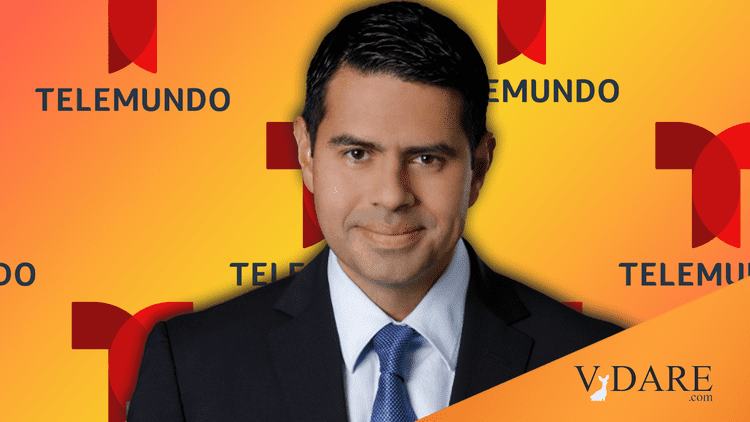 When invading forces have a foothold, they capture the radio and TV stations in order to broadcast propaganda and control the public.

It appears the dinosaur news networks see their future as bi-lingual.

On his May 5th show Rush Limbaugh mentioned NBC is hiring new executives from Telemundo.  [New York AG Going After NBC News May 5, 2020] So the new head of NBC News, MSNBC, and CNBC is a Mr. Cesar Conde. He was most recently the chairman of NBCUniversal Telemundo Enterprises, previously worked at Univision for 10 years. [NBCUniversal Restructures: Mark Lazarus To Oversee TV And Streaming; NBC News Boss Andy Lack Exits, With Cesar Conde To Head Combined News Operation, by Jill Goldsmith, Ted Johnson, Yahoo, May 4, 2020]

Mr. Conde was born in NYC to a Peruvian immigrant father and a Cuban exile mother. He grew up in Miami, Florida. Except for learning to climb the corporate ladder and learning to line his pockets with The Yankee Dollar, it appears he has not "assimilated" well, as is the case with many post-1965 immigrants and their following generations.  ("Natural conservatives"!!)

He promotes the "Hispanic" community.    I see no mention of him putting energy into the broader American community. His corporate "achievements" have up to now all been in foreign-language (Spanish) television that exists primarily due to massive illegal alien presence in the USA. He and his employers profit off the illegal alien traffic. Scoff-laws. Mr. Conde's wikipedia page includes this (enphasis is mine) :

"Telemundo’s commitment to empower the Hispanic community was reinforced in March of 2019 when “Hazte Contar,” or “Get Counted,” was added under the umbrella of “El Poder en Ti.” The campaign seeks to increase participation in the upcoming elections and 2020 Census, which will help improve quality of life through a fair distribution of federal funds.

We read nothing of Mr. Conde starting programs to teach our American Constitution, culture and history to his "community".

VDARE.com has many articles chronicling Telemundo's open-borders hooliganism such as hiring illegal alien actresses.  Blogger Federale has sounded the alarm!

Now Mr. Conde is set to run prominent news organizations. The presidents of NBC news, MSNBC, and the Chairman of CNBC will report to Mr. Conde.  Very likely more Jorge Ramos-type reporters and anchors across all of NBC's networks, scolding Americans for being American.

Steel yourself for 24-7 open borders hectoring ramped up to new extremes from all NBC "news" groups this election year.